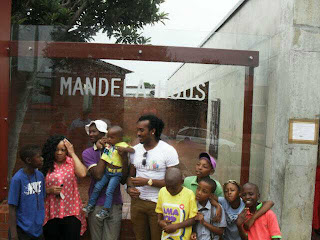 Audrey Allen Foundation For Children is visiting Ghana come 14th Feb.2013. If you are in Ghana and wish to be part of the event,pls holla. The Founder of the Foundation Miss Tosin Allen will be available for exclusive interviews and press release briefings with any Ghanaian Media,press and blog owners.our Goodwill ambassedors,Bryan okwara,Aanu Michael,Andrew Rere Young,Femi Lawal amongst others would also be in attendance.Pls, Send ur interview questions to audreyallenfoundation@hotmail.com or info@audreyallenfoundation.com. Kindly help rebroadcast. www.allchildrenprojects.blogspot.com. www.childrenprojectsphotoblog.tumblr.com, www.audreyallenfoundation.com. Follow us on twitter @childrenproject. Facebook:Audrey Allen Foundation .
Posted by Unknown at 15:50 No comments:

David Gyasi, a famous actor who is currently stars alongside Halle Berry and Tom Hanks in the critically acclaimed film ‘The Cloud Atlas’ in the US has earned himself a place in the newest Campari television commercial currently rocking the Nigerian airwave tagged the ‘Unstoppable’.
The new campaign, entitled ‘Unstoppable’offers a glimpse into the life of an inspiring and charismatic Nigerian man played by Gyasi. As we follow him through his work day and into the evening, he is seen enjoying Campari with friends before meeting an elegant and sensual woman, and fellow Campari drinker, at a bar. The scene ends with the stylish and refined couple striding forward, leaving the viewer with a sense of intrigue and anticipation at things to come.
According to Richard Black, Marketing Director at Campari International, and who also oversaw the creation of the new campaign, “We wanted to reflect the hope and positivity which characterize the Nigerian consumers, whilst staying true to the vibrancy and elegance of the world’s best-known aperitif. The Italian passion of Campari and the optimism of Nigerians are natural partners, which combine to create a sense of anticipation at things to come and a belief that anything is possible.”
Creative Director of Saatchi & Saatchi Cape Town, Gavin Whitfield, also said that “Nigeria has a diverse ethnic and cultural mix which makes the country a very complex one in terms of communication. We coupled our 15-year track record of creating communication for Nigeria altogether with in-depth research to ensure that we truly reflected the needs of our consumers and could offer them a story that they could identify with, and the resulting campaign reflects our findings– a young and outgoing population with an unshakeable optimism that is distinctively Nigerian.”
The Unstoppable campaign appeared first on TV Continental on December 16th in the 45 sec format, followed by the main national TV stations, cable TV and music platforms such as Galaxy TV, AIT Network, STV, ON TV, RSTV among others. As of January 1st 2013 it will continue to be seen in the 30 sec format in the same channels.
Created by the global advertising agency Saatchi & Saatchi and featuring actor David Gyasi, who is currently starring alongside Halle Berry and Tom Hanks in the critically acclaimed film The Cloud Atlas, the big budget advert will be extended to the OOH campaign next year.