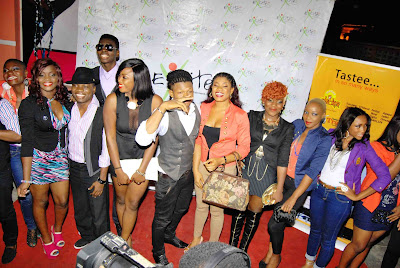 Last Saturday was an especially exciting day for the 16 housemates of the 2012 Next Movie Star. After the 10-day training and grooming session culminating in their exclusive media unveil earlier in the week, the organizers of the celebrated reality television show hosted the housemates to a grand welcome party. Upscale events and entertainment centre, The Place, in GRA, Ikeja, Lagos, was the venue of the well-attended Welcome Party.
Chauffeured in a glittering white Limousine, the housemates, resplendent in their tonsorial ensemble thanks to Make Me Beauty Place (the make over partner) and dressed to the nines, were welcomed by screaming fans and family members who had not seen them in the past three weeks and who would not see them for almost the same number of weeks except on television. That, notwithstanding, did not prevent the acting prospects and their guests from unwinding and letting their hairs down without inhibitions. Anchored by popular 2011 NMS first runner up, Tomiwa, and Soundcity presenter, Adams, also an alumnus of the NMS; with support from Boma McAke and Urchmouth, the show was as colourful as it was captivating especially the drama sketch put up by the housemates.

While welcoming the guests, Sam Uche Anyamele, associate producer for this year’s show, declared that the idea of the welcome party was conceived to properly introduce the housemates to the public while also affording them the opportunity to wine and dine with their family and friends before entering the house proper. “We felt it expedient to put together a welcome party whereby the housemates can mix and mingle with their own people before the competition proper begins. This is the point at which the housemates say goodbye to their friends and family members.” Anyamele went on to talk about this year’s theme, Spotlight Beckons, recalling the various successes recorded by alumni of the show over the past eight years, and advising the current housemates to aim for the skies in their aspirations. He said, “The NMS is here to support and offer you all that you need in terms of training and exposure to succeed in the global entertainment industry. We have done it before and we will continue to do it. Spotlight beckons on those that are ready to embrace it wholeheartedly.”
Meanwhile, prior to the party, the housemates visited the Heart of Gold Hospice orphanage in Surulere, Lagos, where they donated various items and spent time with the kids. According to ’Port Harcourt Girl’, Mina Horsfall, “Seeing the kids and their various forms of challenges, I was moved to tears. I have never seen them up close like this. It is so moving. Thank God for Next Movie Star, I probably would never understand as much as I do now the extent of their pains and challenges.” The visit was part of the Corporate Social Responsibility of the NMS. Thereafter, OUCH!, the official clothiers for NMS 2012, played host to the housemates where they were introduced into the urbane world of jet-set couture and outfitted for their welcome party.