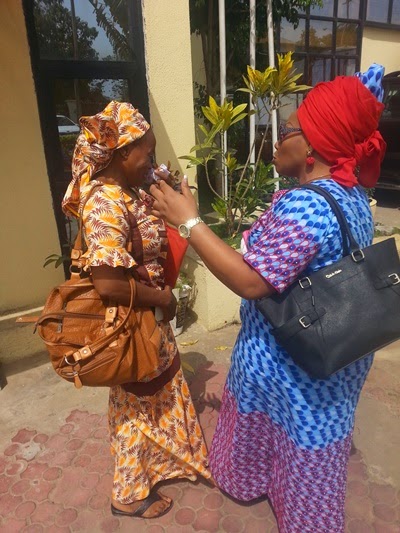 It was a swell Christmas for one of the victims of the Nyanya bomb blast when Women in Clergy, under the leadership of Prophetess Nonnie Robertson gave her reason to smile without her only child whom she lost in the bomb blast.
Recall that Madam Grace Omokoro Joe, was sometime in May, 2014 empowered by the same religious body where she was given several gift items including cash.
The woman who is also a widow told reporters that her only Son, Joel Olukayode, a graduate of Federal University of Technology was everything to her and that death wickedly snatched her away on the fateful day.  She said Joel was to resume his first temporary job in Abuja town the said day the incident happened.
She said " on the fateful morning, we had our morning devotion and I asked my Son to take at least a cup of tea, but he said he was okay, and I gave him my blessing. After 10-15 minutes that he left, the blast went off. I went outside to check if he was still there, but I didn't see him, so I quickly ran to the park, and on getting there, I saw my Son on the ground, dead. That was the last thing I could remember. He was my only child"
However, as part of their Christmas sacrifice to the nation and those who are continuously at the losing end of the Boko Haram war, Prophetess Nonnie and few other members of the Women in Clergy empowered the bereaved woman with different gift items, including bags of rice and some undisclosed amount of money.
(more after the cut)

The woman was also driven to the Nigerian Christian Pilgrims Commission, where she met with the Executive Secretary, Mr John-Kennedy Opara.
While also presenting her with some cash,  Kennedy told her to take heart as God was already using some individuals to console her over the death of her only child.  ‘’Though it’s painful without a child, but we assure you that we will continue to play our own role in your life.’’ Kennedy said. He further directed prophetess Nonnie to visit again with the woman in February, 2015.


Reacting to the gesture in tears, madam Grace said, ‘’ Even though nothing can replace my son,  succour has come my way through Prophetess Nonnie and her group as well as oga Kennedy Okpara. In fact, I can’t thank them enough. How do I begin to thank them? My Son is dead, but he lives on. He was a writer. Here is the book he wrote before some people terminated his life at the park (Showed this reporter). He died in Christ, and today, the same Christ is using some men and women of God to take care of his mother. (in tears) God will bless them. I did not know them from anywhere. I just found favour in them, because I think they were touched by my story. God will bless them. I also want to use this platform to thank my Son’s friends who have been checking on me. God will bless them. I thank everybody who has contributed to my well-being since my Son left me, including the Nigerian media. God bless you for always picking up my story.
speaking with journalists after the empowerment exercise, Prophetess Nonnie said it was the reason for the season. ‘’ She is almost a forgotten victim of insurgency in the country. There are many of them on the streets who have committed no crime apart from being Nigerians. Some of them have lost everything to the war, are they are yet to get help from any quarters.  These are the true national heroes. Just imagine her story. She had just the Son and no one else in this life. She is a widow. Tell me how she will survive without the Son she had hoped on so much?  Her story has remained one of the most pathetic, and that is why I’m particularly interested in her welfares. We decided to empower her today because this is the time she will begin to feel the absence of her Son, being the first Christmas since the death of her Son.’’ She said.


Speaking further, Nonnie blamed some people whose duty in government is to reach out to these victims of bomb blast but have diverted items meant for these people. ‘’ I thik we cannot do this alone. We need the federal government’s support to be able to reach out to these forgotten victims. We have many of them in the Borno state. We have mobilized our members with the few gift items we were able to generate, and they will be travelling to Maiduguri to visit some IDPs centres.  Even in Abuja here, there are stories journalists have not relayed to the public yet. I think we need everybody’s synergy, including the media. It is not enough to fight insurgency without looking back at the victims of the same insurgency. I’m using this medium to Thank John Kennedy Okpara for some of the supports he has rendered to some of these people we try to revive. may God bless him.’’ Prophetess Nonnie said.
Posted by Unknown at 12:46