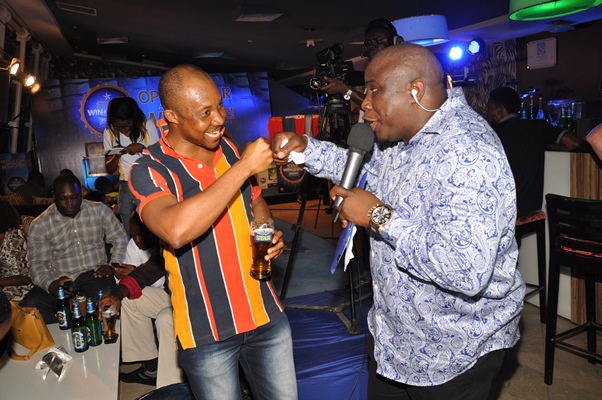 Date was Saturday September, 7, 2013.Venue was De Marquee, an upscale entertainment and relaxation spot, located at Mega Plaza. The ambience, accentuated by the unique touch of Star lager beer’s presence was nothing short of exciting and the atmosphere was simply electrifying.On the wheels of steel, churning out club-banging hit, was DJ Exclusive.
(more after the cut)

The event was none other than the first edition of the year’s Star ‘Win and Shine’party. Nigeria’s favourite beer will still host 99 more of such parties in different locations across the country, between September and November, 2013.
The party which was compered by ace comedian, Gbenga Adeyinka, started on a lighter mood with a bit of karaoke and some trivia games as guests kept filling the venue. The gig went full swing at about 8:30pm as Adeyinka threw a few rib cracking jokes to the delight of guests. He informed guests who had filled both inside the lounge and the open terrace, that there were loads of prizes to be won via a raffle draws.
Consumers of Star took home mouth-watering prizes such as LED TVs, BlackBerry phones, DVD home theaters, authentic football jerseys, Star carpets and N50,000. The stars of the night were however James Francis Enikuomehin, a student of Chemical Science of the Olabisi Olabanjo University and Ikem Okuhu, a journalist. They won N200,000 and N100,000 cash prizes respectively.
Speaking on his prize winning, Enikuomehin said: “I feel so great tonight. I was looking forward to winning a flat screen TV and not even the grand prize, but I eventually won N200,000.”
Okuhu had given up hope of winning until his ticket won him N100,000.
Omotunde Adenusi, Brand Manager – Star, promised visitors to the Star Win & Shine parties a swell time and loads of fun and excitement.


DJ Exclusive got the crowd rocking non-stop to musical hits from his wheels of steel. The crowd swayed non-stop till the wee hours of the morning.
Posted by Unknown at 09:32