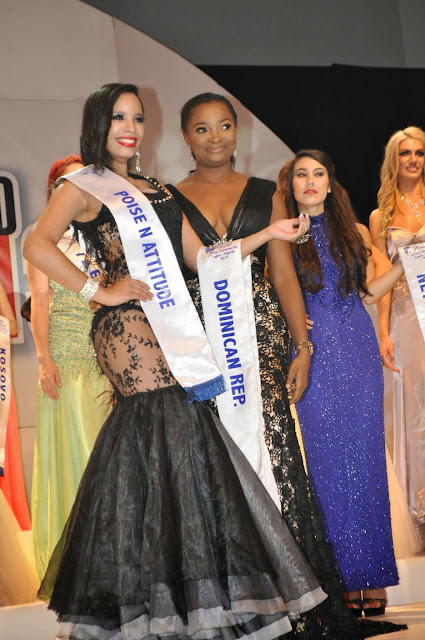 (more after the cut)

The beauty queens opened the pageant with a dance performance of Nigeria’s latest moves such as Skelewu, Azonto and Etighi, dressed in the Nigerian Iro and Buba attire. Popular comedian, Buchi left guests in stitches as he reeled out rib cracking jokes.

“The reason we chose to host this 5th edition of the Exquisite Face Of The Universe in Nigeria is to portray a positive image of Nigeria while showcasing Africa’s rich cultural diversity. We also believe this pageant can help attract investment opportunities in the tourism sector” opined Project Director, Ethel Okosun during the event.

The contestants came out in similar bright orange ensembles for the swimwear category exiting the stage to Wande Coal’s Rotate. The evening gown category also them in form fitting bespoke floor length gowns.

Pop Icon, 2Face came on stage to perform some of his hit songs such as One Love, African Queen and ended the performance with Implication. He congratulated all the contestants telling them they were all winners as he exited the stage.

All contestants were welcomed back on stage with Bruno Mars If I Was Your Manplaying in the background. The top five finalists were rounded up while the final three were selected after a Q&A session with the judges. While responding to the judges, Miss Sweden Tewoldeberhan Makda noted she never experienced any negative thing throughout her seven-day stay in Nigeria.

While waiting for the judges’ decision on the final three, guests were treated to a live performance of Sunny Okosun’s song, African Soldier by Eazy Okosun, brother to the late Gospel legend.

After an arduous screening process based on outfits, appearance, confidence and mannerism, judges announced Miss Brazil, Souza Paula as the 2nd runner up with a cash prize of 2000 USD. Miss Sweden was crowned 1st runner up with an additional cash prize of 4000 USD while Miss Dominican Republic, Rosa Emilia Jayvier emerged winner Exquisite Face of the Universe, 2013 amidst fire works and glitters on stage with a bonus cash prize of 10,000 USD.

Speaking excitedly amidst tears after being crowned by Founder & CEO of Exquisite Face of the Universe, Evelyn Addy-Sackey, Miss Dominican Republic said she would use her new position to champion the course of malaria and HIV eradication.