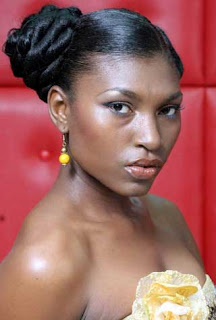 There was a marriage boom in Nollwood, expected next should be a baby boom. Already someone is blazing the trail. Nollywood star actress Ufoma Ejenboor we can confirm to you is pregnant. In fact she is getting set for motherhood, and has been doing some baby shoppings lately.
It comes as a coincidence that the work that brought her to stardom is the ‘My mum and I’ soap opera. As we speak she flaunts her baby bump to whoever cares to look her way.?
The actress started off as a model and became a known face with her work in Lagbaja’s ‘Dream come true’ video. .  Ufuoma was the first runner-up at the 2004 Miss Nigeria pageant who later represented Nigeria at the Miss Earth 2004 International pageant in the Philippines since 2010. Ufoma is married to an advertising practitioner Steven McDermott.
Posted by Unknown at 07:34