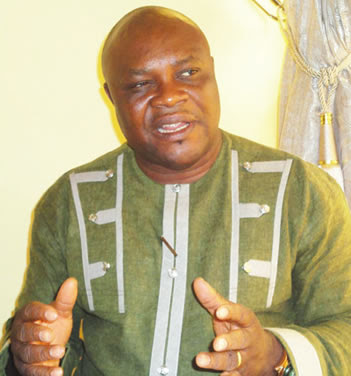 (METRO NEWS)The Transitional Local Government Chairman of Mbo Local Government Area, Akwa Ibom State, Mr. Okpo Ekere, has died of gunshot injury, one month after he was shot by protesting youths suspected to be from Ebughu.

He died on Tuesday night in an Indian hospital, where the state government flew him to for comprehensive medical attention.
Ekere was on his way to broker peace between two warring communities of Ebughu and Effiat in Mbo LGA when some youths from Ebughu waylaid and shot him on May 18.
It was gathered that the youth were protesting against the killing of their kinsmen, Mr. Dickson Dickson (38), and his friend, Mr. Godwin Onofi (33), by some youths suspected to be from Effiat.
It was learnt that the heads of the slain Ebughu men were severed after they were killed while their bodies were buried in sand.
As a reprisal, Ebughu youths were said to have spotted an Effiat man in the LG chairman’s vehicle and demanded that Ekere handed over the man to them.
But it was learnt that the LG boss refused and he was shot at close range. The shot ripped Ekere’s stomach.
A source said, “They also inflicted a machete cut on his head. I think they wanted him dead, save for his police orderly who pleaded with the youth to spare him.”
The riot policeman was said to have told the youth that Ekere was the LGA chairman and was on his way to Ebughu to broker peace between the two warring communities.

learnt that Ekere was rushed to a nearby traditional healer at Edikor community, where eight bullets were removed from his body before he was taken to the University of Uyo Teaching Hospital.

On May 30 at Qua Iboe Terminal, Ibeno, during the inauguration of a 300-space office complex of ExxonMobil, Governor Godswill Akpabio said Ekere had been transferred to an Indian hospital for comprehensive medical attention.

A professor in the University of Calabar and Ekere’s friend, Oko Anni, on Sunday condemned the youths’action, describing it as barbaric, callous and capable of retarding development in the area.

Anni, who is from Unyenge in Mbo, said it was wrong for the youth to take the laws into their hands, adding that grievances could be expressed without recourse to violence.

“Ekere did nothing wrong in trying to settle the two warring communities. Killing the local government chairman, following the alleged killings of their kinsmen by Effiat people, invalidates whatever rights they might have had to protest.

“If you have any grievance against your brothers, there are ways you can address them. There are institutions in the society that take care of these issues.”

The Commissioner of Police, Mr. Umar Gbadabe, who confirmed Ekere’s death, said 12 youths from Ebughu had been arrested, adding that one of them had been identified as the man who shot Ekere.

“We wonder if something like this had happened, the youth would have reported the matter to the police at once. Now they have taken law into their hands. We are charging them to court soon,” he said.

The Commissioner for Information and Communication, Mr. Aniekan Umanah, described Ekere’s death as unfortunate, adding that the youth had no right to take the laws into their hands.

He said, “It is unfortunate that the young man went down. It’s important for the community to caution their youths. The government has taken appropriate steps to get to the root of the matter.”

“If somebody is killed, we will send the case file to Department of Public Prosecution, which will advise us whether the suspects are culpable or not. At the end of the day, they will be charged to court.

“Two wrongs cannot make a right. Jungle justice does not pay. Whoever kills is culpable and will be killed, that is what will happen.”