Unilorin student gets 20yrs in prison for fraud 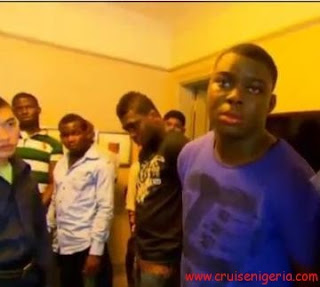 Justice Mohammed L. Shuaibu of the Federal High Court, sitting in Kaduna, on June 5, 2012 sentenced an undergraduate of the University of Ilorin, Imonina Kingsley, 25, to 20 years imprisonment on a four count charge of impersonation, possession of fraudulent documents and attempt to obtain money by false pretences preferred against him by the Economic and Financial Crimes Commission.
One of the four count charges for which he was sent to jail reads: “That you, Imonina Kingsley “M” on or about 4th April 2008 at Ilorin, Kwara State within the jurisdiction of the Federal High Court did obtain by false pretence the sum of One Thousand US Dollars ($1000) from one Mr. Christopher De Troy through the use of a scam letter via your mail box thomasduke4luv@yahoo.com and thereby committed an offence contrary to Section 8(a) and punishable under Section 1(3) of the Advance Fee Fraud and other Fraud Related Offences Act 2006.”

Kingsley, who is to spend five years on each of the four count charge, gave his address as at the time of his arrest as Rubby Hostel, Tipper Garage, Tanke Ilorin, Kwara State.
He hails from Ndokwa East Local Government Area of Delta State.
The suspect, who was arrested on April 4, 2008, during a special operation code-named Operation Cyber Storm1, at Wave Network Net Cyber Café located along Pipeline Road, Tanke, Ilorin, Kwara State, used the false identity of a Mr. Thomas Duke, a supposed gay from the United Kingdom with the email address given as thomasduke4luv@yahoo.com to send fraudulent mails with intent to defraud the unsuspecting victims.
In other instances, he also claimed to be one Muyiwa Akanbi, a Beninoise, and Mary Jone.
In his confessional statement, Kingsley admitted that the email address, thomasduke4luv@yahoo.com, belongs to him and that he is into the “business” to make money and pay his fees at the University of Ilorin, Kwara State where he was studying Geology and Mineral Sciences.
He also confessed that on February 12, 2008, he sent an e-mail to Luis Barco, attaching a photograph of an unknown man, which he downloaded from the Internet and claimed to be a gay by the name Muyiwa Akanbi.
At another time, he mailed a message and presented himself to one Mr. Andrew Corrigan as a UK-born gay but based in Africa.
Another of his victim is Mr. Christopher De Troy of America, whom he hoodwinked into parting with $1,000 via Western Union when he presented himself as a gay from the Republic of Benin.
In another development, the EFCC has secured a conviction in the case involving Jacob Chinenye Isintume, aka Prince Williams Mbeki, who was charged to court on a three count charge of unlawful possession of documents of false pretence.
Justice L. Akanbi on June 13, 2012 at the Federal High Court sitting in Port Harcourt, Rivers State, convicted and sentenced Jacob Chinenye Isintume to seven years imprisonment without an option of fine, on two out of the three count charges preferred against him.
It would be recalled that Isintume was arrested on January 2, 2012 at Ocabik Planet Hotel, off Stadium Road, Port Harcourt, Rivers State, by officers of the Intelligence Detachment Headquarters, JTF Operation Restore Hope.
At the time of his arrest, he was in possession of a laptop computer with various forged documents stored in it, as well as a superimposed image of himself on pictures of the former United States President, Mr. George W. Bush, and former British Prime Minister, Mr. Tony Blair.
Also, Justice Ibrahim Buba of the Federal High Court sitting in Asaba, Delta State, on June 14, 2012 convicted and sentenced Paul Omokaro and Johnson Obi to three years imprisonment on each of a two count charge of conspiracy and illegal dealing in petroleum products. (eagleonline)
Posted by Unknown at 12:01