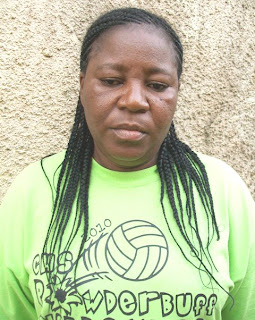 A 48 year-old woman, Mande Fatima Bala, has set a new record in narcotic smuggling in the country.
She inserted 66 wraps of substances that tested positive for methamphetamine, weighing one kilogramme, in her private part as she attempted to board a Kenyan Airways flight to Nairobi.
According to the Agency, no suspect has ever inserted such a large quantity of drugs in his or her private part since the establishment of the National Drug Law Enforcement Agency in 1989.
The suspect, who is a graduate of Accountancy, was apprehended a week ago at the Murtala Mohammed International Airport, Lagos.
The quantity of the drugs was so much that it affected her gait, thus attracting the attention of officials.
Unfortunately, nemesis caught up with her when one of the wraps fell on the floor at the screening area as she bent down to pick up her belongings.
Upon interrogation and examination, she confessed to the crime, stating that she was asked to swallow the drug but was scared of death.

In all, 66 wraps of methamphetamine came out of her private part.
Preliminary investigation revealed that she lived in Australia for about two years before she was deported in 2010.
The NDLEA Commander at MMIA, Lagos, Hamza Umar, described the case as shocking.
Umar said: “This is incredible. She was desperate but I am happy that she was promptly detected. No suspect has ever inserted such a large quantity of drugs in the country. Usually, cases of insertion are not more than 300 grammes. It is amazing” Hamza stated.
According to the suspect, who is a widow and mother of three, it was how to pay school fees that lured her into the criminal act.
She said: “I am a widow with three children. It was N45,000 school fees for my child and landlord who is threatening to quit me by July for not paying my rent that pushed me into drug business. I was instructed to swallow the drugs but I was scared because I have never seen drugs in my life. I used to sell water and drinks after my husband died in an auto accident in 2007. Few years after, I lost everything and could not feed. I studied Accountancy but I have never practiced.”
She graduated in 1992 from Obafemi Awolowo University, Ile Ife, Osun State.
She added that she concealed the drugs herself.
In her words: “I was given the drug in a hotel. I was afraid of death because I have heard of people dying because of drug ingestion. So I decided to insert the wraps on my body. It was difficult because I could not walk normally but I have to try my best to avoid suspicion. I have nobody to take care of my children.”
The Chairman/Chief Executive of the Agency, Ahmadu Giade, in his reaction said that everything about the suspect is disturbing.
Giade said: “Apart from the quantity of drugs caught with her, her route is also a new development in drug trafficking. Drug barons now adopt a relay approach to drug trafficking. They wanted to use her to take the drug to another African country before using an indigene of that country to take the drug to other continents where the profit is higher. We are not oblivious of their moves and we are prepared to nip them in the bud.”
Mande Fatima Bala hails from Lagos Island, Lagos state and lives at Ijoko in Ogun State.
She began her primary school education at Anglica Primary School, CMS, Lagos.
Mande Fatima Bala also attended Aunty Ayo Comprehensive High School Obalende, Lagos before studying accounting at Ife.
She will be charged to court soon.