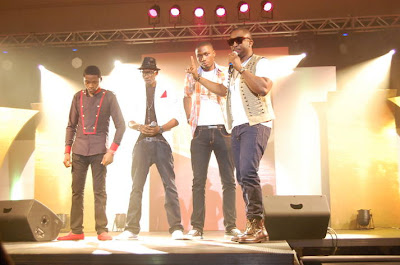 It was a night of fun and excitement as the second leg of the 2012 edition of the Amstel Malta Showtime held at the ultra-modern Best Western Hotel, Benin City, capital of Edo State.
The variety show, which comes from the stables of Nigerian Breweries PLC., makers of premium low-sugar malt drink, Amstel Malta, featured exciting performances from top Nigerian artistes including rave of the moment, Davido as well as ace rapper, Naeto C with the versatile Darey ‘Art’ Alade stepping in as anchor of the show.
The event, which was attended by students from tertiary institutions from within and outside Edo State, also featured comedy from fast rising comedian, Buchi, as well as electrifying dance routine from dance group, Corporate Dance World.

However, the night did not only belong to the superstars as some of the finalists selected at the auditions slugged it out and showed their best in singing, dancing and comedy competitions.
The fate of the contestants in all the three categories of the talent hunt competition was decided by the audience via voice votes. After pulsating performances from all the contestants, petite Emuoborsa Orogun as well as Victor Chidi Ebere and Daniel Chibueze Madu, were adjudged winners in the dance, comedy and singing competitions respectively
The winners each got the sum of N500, 000 cash as well as brand new iPads. They would also proceed on a luxurious two-day all-expense paid vacation for two people to Lagos courtesy of Amstel Malta. The runners-up did not go home empty handed as the first and second runners-up in all categories of the competition got N150, 000 and N100,000 respectively.
Posted by Unknown at 04:59