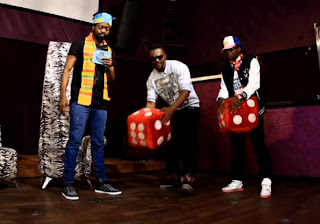 After Nigerian artistes dominated several episodes of  The
Big Friday Show, their Ghanaian counterparts this weekend took over,
with A-list duo, R2bees, and Efya leading the charge.
The two hot acts were the studio guests of Episode 10 of the show
which was shot in Accra, Ghana.
R2Bees is one of Ghana's foremost Hip-Life/Afro-Pop groups and have
been pumping the industry with hits over the years. They talk to host
of the show Basketmouth about their rise to stardom and their new
single "Life"(Walaahi) produced by the hitmaker, Killbeatz.

Efya is a new voice on the African soul music scene. She used to be
known as "Jane", one part of the musical duo, Irene and Jane. She
talks about her evolution from Jane to Efya. "I needed to be 'Miss
Jane' in order to discover Efya. I've found out what kind of music I
want to do now. The 'Jane' from 'Irene and Jane' is over; that time
was for us to grow in the music industry, to know the right things to
do. Efya is 'Miss Jane' evolved." She also talks about going solo and
her first single, "Little Things" as well as collaboration with
several acts for her debut solo album.
Episode 10 also featured  the CELEB SURPRISE segment where a lucky Glo
subscriber (BRIGHT OTOO) with the help of the BIG Friday SHOW crew
surprised his brother (JOSH) who was pleasantly surprised by a visit
from his favourite celeb IRENE LOGAN. Josh and Bright won 2 Galaxy
tabs courtesy of GLOBACOM.

DR LOVE a.k.a the official Pimp Daddy of Hearts was also on hand to
give advice on all love and relationship issues.

The other segments in this week's edition include the ASK/REPLY where
Glo subscribers text in questions to know more about the studio guests
(R2bees and Eyfa)  and the weekly Glo presents Big Friday Show
Countdown.