At the meeting premier 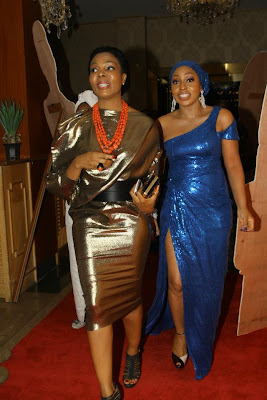 It was more like a festival at the Oriental Hotel on Victoria Island last Friday. The event was the much awaited premier of Audrey Silva’s movie, The Meeting. Even in it’s shooting stage, The meeting was being hailed as a potential blockbuster. The selling point was not just the story line but the quality of the equipment used. Also, the movie has the some of the industry’s best hands on production and direction.
The movie was the brain child of Rita Dominic and director Mildred Okwo. So as expected, the guests at the event are A-listers. Toping the list was the president who was represented by the Nigerian Minister of Petroleum Resources, Mrs Diezani Alison-Madueke.
In her speech she said, “Let me begin by thanking The Audrey Silva Company, Rita Dominic, Mildred Okwo and the entire team for the fantastic work you have done with The Meeting, which we have just seen. This movie will be much talked about in our country and our continent in the weeks ahead.
What you have done with The Meeting, reaffirms an indigenous progression in the movie industry that continues to inspire hope and helps to set agenda for our arrival as a nation of great reckoning.

This year, Africa’s global brand, Nollywood celebrates 20 years of an incredible run. From humble beginnings it is now described as more prolific than Hollywood, and forecasts and projections on the Nigerian economy are not complete without an exhaustive analysis on the Nollywood effect.”
In the movie and also at the event were; Jide Kosoko, Kate Henshaw, Basorge Tariah, and Chinedu Ikedieze. The stars of the movie are Femi Jacobs and Linda Ejiofor  both names you know from the popular TV soap opera, Tinsel.
According to Rita Dominic, Audrey Silva is aimed at casting diverse talented people who suit the roles. "We are building a real company not just extensions of ourselves.  I am very interested in owning a properly structured company that can compete anywhere in the world. There are many more movies to come,” she said.