What you don't know about your Blackberry 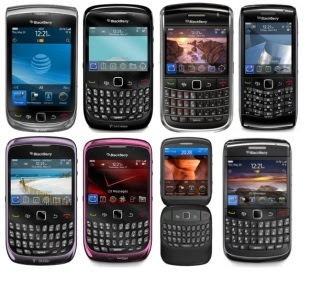 History of the BlackBerry Brand The first BlackBerry device, the 850, was introduced in 1999 as a two-way pager in Munich, Germany. The name BlackBerry was coined by the marketing company Lexicon Branding. The name was chosen due to the resemblance of the keyboard's buttons to that of the drupelets that compose the blackberry fruit.
BlackBerry first made headway in the marketplace by concentrating on email. RIM currently offers BlackBerry email service to non-BlackBerry devices, such as the Palm Treo, through its BlackBerry Connect software.


The original BlackBerry device had a monochrome display, but all current models have color displays. All models, except for the Storm series and the all-touch Torch 9850/9860 have a built-in QWERTY keyboard, optimized for "thumbing", the use of only the thumbs to type. The Storm 1 and Storm 2 include a SureType keypad for typing. Originally, system navigation was achieved with the use of a scroll wheel mounted on the right side of phones prior to the 8700. The trackwheel was replaced by the trackball with the introduction of the Pearl series which allowed for 4 way scrolling. The trackball was replaced by the optical trackpad with the introduction of the Curve 8500 series. Models made to use iDEN networks such as Nextel and Mike also incorporate a push-to-talk (PTT) feature, similar to a two-way radio.
BlackBerry is a brand of wireless handheld devices and services developed by Research In Motion (RIM). The first BlackBerry device, an email pager, was released in 1999; the 100 millionth BlackBerry smartphone was shipped in June quarter of 2010 and the 200 millionth smartphone was shipped in September quarter of 2012.
Most BlackBerry devices are smartphones and are primarily known for their ability to send and receive push email and instant messages while maintaining a high level of security through on-device message encryption. They are also designed to function as personal digital assistants, portable media players, internet browsers, gaming devices, cameras and more. BlackBerry devices support a large variety of instant messaging features, with the most popular being the proprietary BlackBerry Messenger service. The BlackBerry PlayBook is a tablet computer offered by RIM.

BlackBerry accounts for 3% of mobile device sales worldwide in 2011, making its manufacturer RIM the sixth most popular device maker (25% of mobile device sales are smartphones). The consumer BlackBerry Internet Service is available in 91 countries worldwide on over 500 mobile service operators using various mobile technologies. As of September 2012, there were eighty million subscribers worldwide to BlackBerry. In 2011 the Caribbean and Latin America, had the highest penetrations of BlackBerry smartphones worldwide – with up to about 45 per cent in the region having a RIM device.