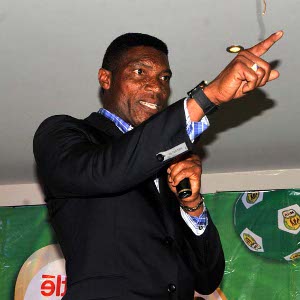 From information reaching me, former Super Eagles goal keeper and captain, Peter Rufai, yesterday night suddenly slumped inside his office.
The football Icon, 49, was rushed to Toki Hospital off Adeniran Ogunsanya, Surulere where doctors are doing everything they can to stabilize him. His younger brother Bruce Rufai said he's yet to come around and doctors don't know yet why he slumped.
Bruce told sports journalist, Kayode Tijani, that Peter has been taking the death of their 78 year old mother badly since her passing some days ago. Please say a prayer for Peter Rufai
Posted by Unknown at 04:01