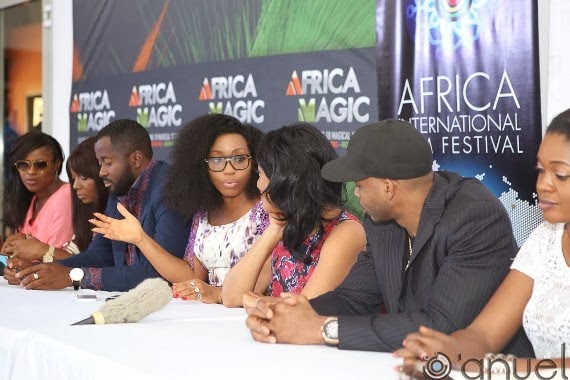 Again the African International Film Festival (AFRIFF) has come and gone and like the last one, the event has failed to make much impact on the industry. Like many local film festivals, it has been a showy event with little or no effect on the industry as a whole. For most part, it has been an avenue for Nigerian movie makers, government officials and two foreign actors to mingle and take pictures which are quickly uploaded on their Instagram accounts. The few non industry guests are treated to movies that are slated for screening.
(more after the cut)

Quality however, was achieved in terms of the venue decorations, strict adherence to the itinerary, and the hospitality. Asides these, all went downhill. The first disappointment was the fact that many of the advertised movies were not shown. It was well publicised that the movie “Half of a yellow sun” will be screened at the opening of the festival but guests were disappointed. Half a Yellow sun had been doing poorly at international festivals around the world and has not received good ratings internationally. Many had thought AFRIFF will be a good opportunity for Nigerians to appreciate their own.  Without explanation and after much publicity, the movie was not screened.
Instead, the South African Film ‘Of Good Report’. The same film which was banned at the opening of the Durban Film Festival in South Africa. South Africans themselves were not proud of the work, yet it featured as a festival opener at AFRIFF.
At the event were top government officials of Cross Rivers State. The biggest name was the governor of the state, Liyel Ikoke. First Lady of Cross rivers State Obioma Liyel Imoke. Others are, The CEO of AFRRIF Chioma Ude and Director Andy Amenechi, American stars, Lyn Whitfield, Vanessa Williams and the Nollywood train of Rita Dominic, Desmond Elliot, Uche Jombo, Kunle Afolayan and many more were at the event. Other stars at the event were, Lydia Forson, Chioma Chukwuka-Akpotha, Gbenro Ajibade, Lilian Esoro, OC Ukeje, Linda Ejiofor, Uru Eke and Kemi “Lala” Akindoju. And that was about all the major movie people at the event.
As an African Film Festival, the only thing not of Nigeria were a few Ghanaian actors at the event and the South African movie that was featured. Even the Nigerian movie industry was not properly represented. Only two movie makers from the Yoruba movie industry were present and there was none from the Hausa parts. This is despite the fact that the indigenous industries make up the bulk of movies churned out from Nigeria.
The Swahili films and their makers were also not at the event. Swahili films are believed to be second in Africa in term of volume. Also absent are film makers from North Africa and other South African countries asides South Africa. The ‘international’ in African International Film Festival has also proved not to be justified. Asides Whitfield, Vanessa Williams, and a few Caribbean movies, there was nothing international about the festival. There were no foreign or international critics of movies on hand. These are people who make film festivals tick, as movie makers put in their films into festivals to get them criticised so they know how well or how bad they have done.
A movie producer had this to say about AFRIFF, “what do they really do in these so called film festivals? They collect money from the state government, pay a few actors to attend, and make noise all over the press. How have any of these festivals benefitted the industry? I know Abuja Film festival is a little better and technical, and that is because they understand what a Film Festival is. I do not see anything the will move the industry forward in AFRIFF.


On the whole, the event is another effort at creating a festival to showcase African movies on a global level. Though AFRIFF has failed to do that, with consistency, there is hope for better events in the future.
Posted by Unknown at 00:05