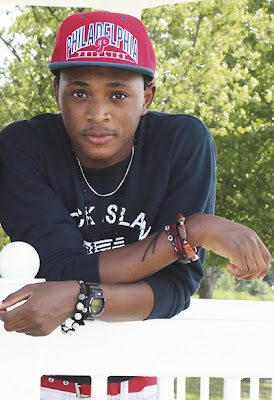 After publicly announcing the beginning of his Music Career With the remix
to Da, OJayy (Olugbenga Amu-wright) 19 years old Son of Famous  Nollywood Actress Bukky Wright is ready to release his first official single titled "Never Let You Go." The brand new smash hit single features
internationally known DJ PUTON, and is produced by fast rising teenage
music producer  Hammed Bombata popularly called "HameedOnTheBeat". The new single 'Never Let You Go', is a fusion of Pop, Hip-hop, Afro pop,
and drum and bass which gives it a unique sound that embraces the
Nigerian hip hop. The song is breath of fresh air to the Nigerian
music industry because of it uniqueness. Rutgers University in New
Jersey studying Biological science with majors in Pharmacy. When asked
why he chose to be a rapper, he said "I love rap because its just
like poetry, I am able to fully express myself by putting words
together.
Also it's the music I grew up listening to, and really

people should listen to my music because I believe I have something to
offer that is different from what we already have around."  He continued,
"after guidance from DJ ZIMO,
DJ  Humility, and my mum (Bukky Wright), I think I am ready to start my
career."