Nigerian actor jailed for being gay

A 28-year old nollywood actor, was on Monday sentenced to three-month imprisonment by a Karu Senior Magistrates’ Court, Abuja, for having sexual intercourse with another man through the anus.
The convict, who resides at Gidan Mangoro, had pleaded guilty to having engaged in homosexual acts.
“I am guilty of the charge against me. I  was under the influence of alcohol and I want the court to temper justice with mercy’’, he said.
The police prosecutor, Mohammed Umar, had told the court that the convict committed the offence in August when the complainant was sleeping in his bed.
Homosexual acts, the prosecutor said, was contrary to Section 284 of the Penal Code. 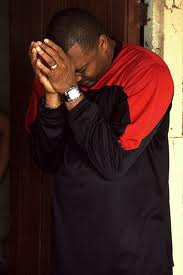 The prosecutor said since Mr. Chukwuemeka had pleaded guilty to the crime he initially denied, the court should try him summarily.
The Senior Magistrate, Nafisatu Buba, sentenced him to three-month imprisonment without an option of fine.
“This would serve as warning to other youths who hide under the influence of alcohol to commit crimes,’’ she said.
When he was first arraigned in early September, Mr. Chukwuemeka pleaded not guilty, saying, “I came back drunk from the night club and thought I was sleeping on the same bed with my girl-friend and I started romancing her.”
At that hearing, Mrs Buba, had ruled that alcohol should not be seen as an excuse for committing the offence, but then granted the accused bail in the sum of N200,000 with two sureties in like sum, with one of the sureties being a civil servant on Grade Level 09.
However, when the case was heard Monday, the actor suddenly pleaded guilty, and Mrs Buba summarily tried him, sentencing him to three-month imprisonment. Homosexuality and lesbianism are seriously frowned at in Nigeria.
In November, the Nigerian Senate passed a strict law banning same-sex marriage and public display of affection by gays in Nigeria.

The bill – Same Sex Marriage (prohibition) bill 2011 – prescribes 14-year jail terms for convicted gays in Nigeria.
“Persons who entered into a same sex marriage contract or civil union commits an offence and are each liable on conviction to a term of 14 years imprisonment,” the new law said.
It added, “Any person, who registers, operates or participates in gay clubs, societies and organization, or directly or indirectly makes public show of same-sex amorous relationships in Nigeria commits an offence and shall be liable on conviction to a term of 10-year imprisonment.”