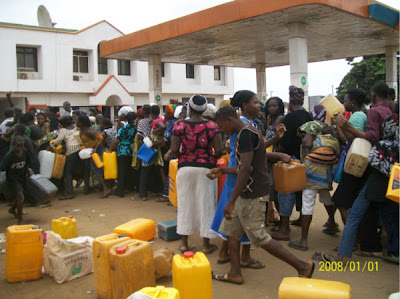 The Nigerian National Petroleum Corporation has said that the long fuel queues in Lagos State may take some time before disappearing.
NNPC, however, described the scarcity as artificial.
In a statement by its acting spokesman, Fidel Pepple, the NNPC said the artificial scarcity was triggered by the destruction of the NNPC’s pipeline at Arepo, Ogun State.
Pepple said the NNPC was finding it difficult to fix the damaged facility following the killing of three of its officials by hoodlums.


The officials were going to repair the vandalised pipeline when they were attacked.
Pepple said: “The NNPC is bridging products from Atlas Cove, Satellite and Apapa depots to Ibadan, Kwara and other Southwest states. But it is a little difficult to bridge as much as 11 million litres of fuel per day through trucks, which ordinarily is easily done through pipelines. There is no reported hitch in that intervention.
“Besides, the repairs of the vandalised pipeline may take some time as the corporation would not risk the lives of its workers in a bid to fix a pipeline, until their safety is guaranteed.”