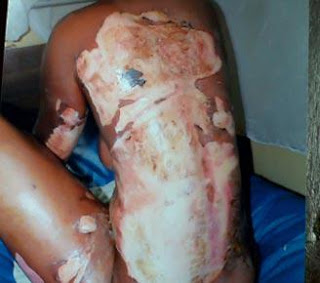 A 35-year-old lady yesterday told how her live-in lover poured fuel on her and set her ablaze in Ikotun area of Lagos State.
The lady, Janet Udegba, who spoke from her hospital bed in pains, said her lover, Mr. Kehinde Adesamuye, 39, set her on fire because he was angry and jealous over her relationship with other men.
Trouble between her and Adesamuye started penultimate Friday, but snowballed into a phase where the man stormed out of her shop, only to return moments later with a keg of fuel, which he poured on her as she was attending to a customer at the Ikotun roundabout bus stop, where she sells cooked indomie.
The fire from her cooking stove and bus lamp exploded as petrol splashed everywhere. Janet’s clothes and body were burnt.
As she screamed and rolled on the ground, trying to douse the raging flame, her lover, who is a motor park tout at the Ikotun round about, simply stared at her, hissed and walked away to buy and lit a stick of cigarette.


After a while, he left the scene.
The incident, which happened about 10p.m., attracted other night traders, who helped in dousing the flame on the body of the woman.
They rushed Janet to a hospital around Isheri area, where she was given First Aid.
The next morning, she was moved to Igando General Hospital due to the severe nature of the burnt.
When she got to Igando General Hospital, she was allegedly not attended to, even though she was weeping in pains.
Four hours after her arrival at the Hospital, she was told that there was no bed space.
She was again moved to ‘Peaceful Convalescent Centre Hospital,’ in Ejigbo.
In pains, Janet pleaded that the Nigeria Police Force (NPF), Lagos State government and a non-governmental organisation, ‘Project Alert-Violence Against Women’ not to allow Kehinde to go scot free for what he did to her.
Narrating the genesis of her predicament, the Delta State-born lady, said: “My husband has always been jealous. He used to beat me every time, under any guise and excuse.

I’ve tried several times to leave him, but he always threatens to harm me. I stayed with him because I was afraid of him and my life. He always told me that I could never escape from him, except I leave Lagos State. Anytime I said I was leaving him, he would say, no problem, but that he would do something to me which I would not forget. Now, see what he had done to me. He wanted to kill me.

“I used to sell indomie at Ikotun round about. There are other men and women selling there too. We’re all friends. Last two weeks Friday, one of the traders had a baby. We went for the naming ceremony. Kehinde was there with me. One of the traders gave me a drink; I just took a sip because I was in my flow.

“That was how it all started. He said I was kissing another man in his presence. He said that I sipped from the bottle that the man drank from. Right there, he started threatening that he was going to deal with me when we get home.

To be on the safe side, I called my younger sister, telling her that I might come over to spend the night at her place. I didn’t want him to beat me. When we got home, he cursed, abused and said all sort of things, but I didn’t respond or reply because I didn’t want him to pounce on me. This behavior continued till Saturday. He even kicked off the bed, but I didn’t mind. I slept on the floor.

When I woke up on Sunday, he had gone out. I rushed to take my bath because I wanted to leave the house before he came back. But he suddenly came back, and started beating me for no reason. He beat so much that I thought he was going to kill me. It was due to the intervention of our landlord that he left me. After that beating, I moved in with my younger sister.”

For reasons best known to Kehinde, he started sending friends to Janet’s shop, to beg on his behalf. He wanted her to forgive him and come back. But she refused.

ast week Tuesday, Kehinde came to the shop with another friend to beg once more, but Janet told him that she was through with the relationship.

Fuming, Kehinde jumped up from his seat, told her that he had nothing against leaving, but that he was going to show her. He made good the threat by dousing her.

The following day, Kehinde was arrested by policemen as he was strolling along the streets of Ikotun.

The Nigerian Compass learnt that Janet and Kehinde dated some years back, before they lost contact.

Friends, who the Nigerian Compass met at their hospital, insisted that it was even Kehinde who deflowered Janet.

In the ensuing years that they lost contact, both got married to different spouses. While Kehinde built a house in Lagos, married and has four kids, Janet married and divorced.
The lover later ran into each other and the second phase of the romance started.

About six months ago, Kehinde rented an apartment for Janet and she moved in. But even before she moved into the apartment, Kehinde was alleged to have always used her as his punching bag. The new apartment, however, seemed to fasten the ride of the relationship down the hills.

Janet told the Nigerian Compass that Kehinde also used to beat his wife.

He used to leave his wife and family for weeks to stay with her and whenever she implored him to go and check on them, he would turn ugly.

Her words: “Whenever I tell him to go and see his wife and children, he would say I was sending him away because I wanted to go and meet another man. Government should make sure Kehinde pays for what he did to me. I am an orphan. I have no father or mother. I sell indomie to make money and live. Now, I’ve spent all my money. In fact, I need help!”

Police spokesperson, Ngozi Braid, confirmed the incident, explaining: “The two of them had been living as husband and wife and had a misunderstanding. The man used substance on her, which we’re not sure of what it is. It is a mixture of some certain things.

But the man would be charged to the Ejigbo Magistrates Court tomorrow (today)”.