Gov Orgi embarrased as Dokpesi absconds from his event 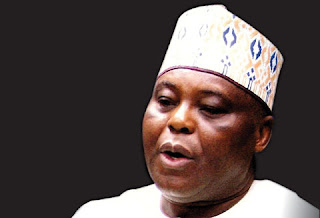 The Chairman of Daar Communications, owners of African Independent Television and Ray Power radio, Dr. Raymond Dokpesi, on Thursday, failed to show up at the 4th Edition of the Raymond Dokpesi Annual Lecture.
The event, which lacked the colour of the previous editions because of the absence of Dokpesi, was held at the Ladi Kwali Hall of the prestigious Sheraton Hotel, Abuja.
No reason was given for his absence at the event.
Dignitaries, who were planning to attend the event stayed away because of this.
While some of the dignitaries had already arrived at the venue of the event, others who were yet to arrive also quickly sent in representatives having learnt that Dokpesi would not be there personally.


Dokpesi was represented by the Group Managing Director of Daar Communications.
The Abia State Governor, Chief Theodore Orji, who was to deliver the lecture, on learning of Dokpesi's absence, mandated his former Commissioner for Information, now in charge of the Ministry of Petroleum Resources, Chief Don Ubani, to deliver his speech.
Orji, who was already in Abuja for the event, was also to be awarded the Raymond Dokpesi Peace Award for the South East.
The spokesman of the Senate, Senator Enyinnaya abaribe, who was already at the venue of the lecture, also left once it was confirmed that Dokpesi would not be attending.
It was learnt that Abaribe left to join Orji in the Abuja Lodge of the Abia State Government where the governor was.

Orji, who had mobilised massively for the event from within Abia State and outside, asked those he commandeered to the venue, including music bands, to leave immediately.

They all headed in the direction of the Abia State Governor's Lodge in Abuja.

But before leaving, they dismantled all the posters and banners they brought for the event, which was regarded as an avenue to make a political statement.

It was gathered that Orji invested a lot in the award ceremony, hoping to make political capital out of it.

He was said to have felt very bad and his ego deflated.

This was because he had the words of Dokpesi that the event was going to be a grand one.
Other governors who were scheduled to receive awards also stayed away.
The governors included Hon. Rotimi Amaechi of Rivers State, Dr. Olusegun Mimiko of Ondo State and Alhaji Abdulfatah Ahmed of Kwara State.
Also scheduled to receive awards at the event were the governors of Sokoto, Kwara and Jigawa States.
But they also did not attend the event.