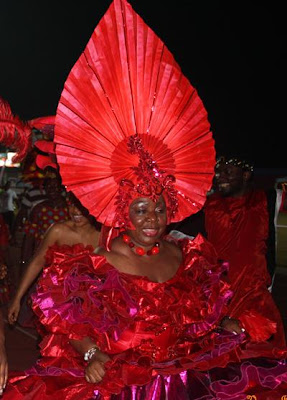 I write this with no prejudice. In fact I respect this woman for being able to survive in a political arena dominated by men. Yet some of that respect was ripped off from my sense of judgement from what I witnessed yesterday. To be fair enough though, my respect means nada to her. I was invited to a ball organised by Senator Florence Ita-Giwa, by a colleague of mine, and as I stepped into the hall, I saw huge banners of stars like Tuface, Iyanya, Tiwa Savage and the likes. I told my colleague this must be a big event, yet I never heard about it. He smiled and said I have not seen anything yet.
The venue was a demarcated part of the new Eko Hotel Expo hall. The hall was massively decorated. The way the stage was mounted, one could easily tell that there will be some cat walking with its runway style. The whole thing was being managed by the best events manager in the country. I mean, Edi Lawani was running from pillar to post while screaming at his walkie talkie every second.
I was told this was a charity event, but what I was seeing was more like a concert. Iretiola Doyle and Olisa Adibua stepped on the stage, as the hosts for the night, after introducing the high and mighties at the event, which include top ranking govt. officials and representatives from over five foreign high commissions including American, a documentary was played to explain why we were all there.

It was a story about how the Senator had adopted 10 children from the Bakasi Peninsula and gave them a home in her house, fed them and sent them to the best schools. Then there was a call for well meaning Nigerians to donate to her course. So that was it? WTF. Is that the reason for all these?
Before you start getting all defensive for her, let me tell you what followed the documentary. First was a fashion show with African prints. That was swiftly followed by another fashion show, which featured the works of an Arab designer from Dubai. The models were, Funke Akindele, Rita Dominic, Shan Goerge, Monalisa Chinda, Joke Sylva and Genevieve Nnaji. Also on stage was Uti Nwachukwu and the a troupe who won the Calabar Festival last year. That is not the end. Artistes that performed includes; Tiwa Savage, Iyanya, Timi Dakolo, and Tuface Idibia. And that is just entertainment.
Champainge flowed on every table, bottles and bottles of expensive wine were popped intermittently, the food was minimal, but the drinks were as good as they come. Oh, that is not all. We are yet to get to gifts. Every lady got a bottle of designer perfume, while every man took home a manicure kit. All these got to the over 400 guests.
If you still don’t see my grouse, then let me ask you. Is all that not too much money to spend for a foundation of 10 children? The kids were not even at the event. She blamed that on Arik wahala.
Let me try and break it down to actual costs:
The Eko Hotel venue goes for nothing less N500,000, decorations, another N500,000(you need to see it). music, stage, lights and event management get way over N2,000,000(please ask Edi Lawani what he charges these days), Drinks and food way over N1,500,000 (Those champaigns and wines takes most of that. Then you pay Eko Hotel for bringing in drinks). There were over 20 stars at the event, Tuface alone charges between N3m to N5m while Genevieve is so expensive these days. Let’s say they got N1m each, that’s N20m. you might say some of them might not charge money, true, but I must assure you that it is such jamborees from politicians that pays these artistes and not music and Nollywood roles. Such events are their meal tickets. Each of those perfumes will cost nothing less than N4,000. Times that by a reduced number of 100 women. That with the other gifts should be above N600,000. Clothes designed by the Arab designer, and air tickets for flying him in for the event(First class of course)all that is over N1m. Lets put other logistics (Security, flying dancers to Lagos, ivs, programmes, etc) at N1m. with all that we’ll get a watered down total of over N27m. If you were there, your calculations may be double of that.
You could say that maybe she got some things for free, lets even say she got half for free. What you still get is alarming. In a country were many children are hungry and cannot go to schools. That amount will build and sustain schools. Someone said “it is her money she spent on the show, and it is her money she is using to take care of the children”, but I ask, does this woman have some business on the side? All she is is a honourable senator, where else will the money come from? It was a shame to see some of my colleagues falling over each other to get the N5,000 doled out to the press men.
Despite all these, I can still say kudos to her. At least there are many politicians out there who are not even raising a finger to help the needy. Adopting 10 children is good, but spending so much to showcase her open arms is bad.