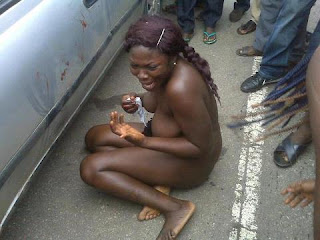 Luck ran out on a female member of a robbery gang today in Abuja FCT. She led a team of four robbers in a car to steal from a female passenger.
She was not so lucky to escape as probing eyes watched for a distance their robbery operation and sympathisers swooped on them rescuing the victim who was later Identified as Obiageli.
The lady-robber was the only one apprehended out of the five thieves as she could not escape thinking phonetics would save her while others ran away.
She was then stripped naked by the mob. Inside the ash coloured Nissan Sunny were loads of ATM cards, Passports of various persons, her bag contained “many phone” an eyewitness said.
This incident happened at the AREA 11 TRAFFIC LIGHT where they were held by traffic as they were been chased. It happend today, at about 2:00pm. (culled from Nigeria Indepth)
Posted by Unknown at 10:47