Man wins N1m gets to live with wife again 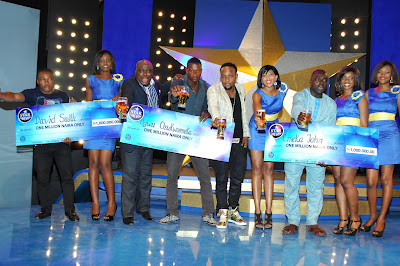 The joy of Chinedu Agoh, a 32 year - old driver from Enugu State, knew no bounds when he won one million at the third edition of the Star TV Game Show. For several months, it had been his dream to be united with his wife and child, under the same roof. This dream for along time appeared bleak due to his meager N25,000 monthly salary. Being the family?s sole bread winner, he could only pay for an ?out of campus? accommodation for his wife, a student of Alvan Ikoku College of Education, Owerri, and his son.
Luck however shone on him when he qualified to participate in the 2012 edition of the Star TV Game Show and subsequently won the star prize of one million naira.


Speaking on how he will utilize his prize winning, Chinedu said: ?I have been staying apart from my wife and son for the past six months due to lack of money to get a befitting accommodation. I currently sleep on the pavement of the underground floor of the hotel in Enugu where I currently work as a driver. I use wrappers and a cardboard given to me by my mother in place of a mattress. The place stinks, but I have no choice but to lay my head there every night. With this one million naira; I will pay for an accommodation for us to come back together as a family and open a bank account for my son.?
He obviously had kind words for Star, describing the beer brand as: ?the best brand. Other brands make me sick but Star keeps me strong. Star is the leading brand. I love Star and appreciate the brand?s work as it keeps shining.?
Chinedu was not the only lucky individual of the night. Chidiaka Onyeachonam, a 26 year -old unemployed graduate and Abiodun Ali, a 27 year - old cloth seller, also smiled home with a million naira each.
Even though Chidiaka is currently unemployed, his one million naira largesse has brought him temporary succour. He stated, ?I have been job hunting for years, but with one million naira from Star, I feel as if I am on the moon now. I am yet to come to the reality that my account will be credited with one million. I pinched myself about three times, just to confirm that I was not dreaming.?
For Abiodun, who hails from Ogun State, he believes fortune had finally found him. ?I have been out of work since November last year, which led me into buying and selling of clothes. My customers majorly are students; I do go to their various schools to sell to them. I am sure with this new status, that era is over? he stated.
The third edition of the show also experienced an outpour of emotions from Daramola Ladipo, a 33 year- old beer parlour owner in Lagos, who was also a contestant. He shed tears when he qualified as one of the nine initial contestants to partake in the games.
He remarked: ?I never believed that the show was real until I became part of it. I shed tears after the first round of the show, which qualified me to contest for the one million because I never expected I would pick one of the highest numbers. Indeed, it is a game of luck. It is the joy from within me that made me cry. Even though I did not win, I have the confidence that I will win if I have the opportunity to be part of the show again. For Star, I pray the beer continues this good deed and remains strong in the market.?