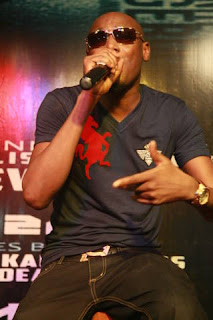 Multiple Headies winner, 2face Idibia, has recently launched an official fan club called ‘2facemaniacs’ along with an official website www.2facemaniacs.com
The group which will be “the official and authorised fan base of 2face Idibia across the globe”, is conceived to celebrate the musician, draw attention to events around him and promote programmes through which he can give back to society.
According to the promoters of the club, the event will be held at Club Scintilla, Lekki and will also witness the inauguration of 2facemaniacs website, to be done by Tuface himself.  She adds, “The website is also built on the basis of giving back to the millions of ever passionate fans of TheLegend 2face Idibia. One of the ways of achieving this is through 2facemaniacsQuiz and fun zone like 2facemanic games.
The website will also host news about the singer, events where he will be performing and lots more.