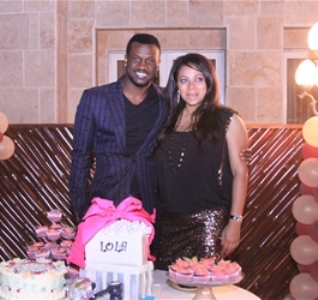 Peter Okoye of P-Square fame organized a surprise birthday bash for his heartthrob, and mother of his baby boy, Lola Omotayo yesterday at the West Fosters, located at 70, Queens Drive, Ikoyi, Lagos.
The bash was attended by family members of both Lola and Peter, including few friends who gathered at the swimming pool side of the classy rendezvous to dine and wine.
In attendance was Lola’s father, Mr. Omotayo, her cousins, close friends and few staff, while those who came from Peter include his two sisters; Lilian and Mary, cousins and friends.
The Managing Director of DANA Air, Jacky Hathiramani also attended the get-together with his wife.
Lola was taken by surprise as she wasn’t aware Peter had made such preparation for her. The multiple award-winning singer had only told her that only both of them were going to West Fosters to have some good time. But on their arrival, Lola was surprised to see her father and other guests who stood up to sing birthday song for her.
Speaking on why he organized the bash for Lola, Peter said “She is a wonderful woman who means a lot to me. Special people deserve special things like this.”