Weekend special. NIgeria has been good to me - UK TV presenter 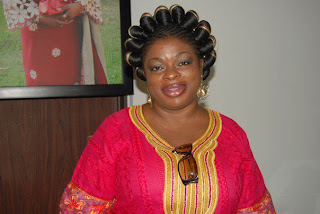 Titi Aboyade Cole is a television presenter extraordinare, who had plied her trade in the UK for over five year. She recently decided to start recording and airing her shows in Nigeria. She speaks with Hazeez Balogun about her struggles and success.
You have two shows in the UK now you are on TV  in Nigeria, are you bringing back the exact copy of your programmes in the UK?
Well one of the show we actually rebranded. It used to be known as the podium in the UK. We now call it the TAC show, coined from my name, Titi Aboyade Cole. The other show is being brought back just the way it is. it is called Podium ceremonial which showcases events all over the world.

What are you planning to achieve with these shows?
The Podium ceremonials is simply an event diary which showcases events by Nigerians and non-Nigerians all over the world. The TAC show on the other hand is a documentary interview thing on a lighter note.
After doing your feasibility studies, you must seen that there are many similar shows already existing in the country, why did you decide to go ahead with yours?
My shows are unique. Just like God created everyone with their uniques feaures, so is my show different from others. There can never be two Titi Aboyade cole show. My show is me. Even the contents are far different.
In the UK it is common for people to sell their shows out rightly to networks, but in Nigeria you have to buy airtime, does this dynamics affect you?
Yeah many shows sell their contents, but even in the UK I do not sell my shows to stations. I own my programmes 100 percent. I buy airtime, I am an independent producer. I can take my content to anywhere. That way I am more flexible and I get all the adverts that comes to the show. i am also not doing the show for money. I do it for the passion. So when I don’t get adverts, I am still happy that I have a successful show.
Have you been getting any support since you started?
I am very blessed. I have been getting support from various people. For example, the president of Galaxy TV is supporting us fully. He gave us airtime free of charge for the first quarter. Even in MITV that I am paying, I am still given a very good deal. Nigerians have been good to be. Though some are complaining about the stations we are on now, but I tell them, that is what we can afford at the moment.
What spurred you into television programming?

It started from a television programmed that I watched in England in 2006. I was running a shop of mine then. Before I left home in the morning, they were saying this news about Nigerians that were arrested for working without papers in the Home Office. I just glimpsed and left for office. When I came back in the evening, the news was still running on BBC 24. I was furious that why wouldn’t they leave us alone.
Though I was not condoning what they did, why would they pick on that and be repeating it as if they found a bomb blast somewhere? You know, when a Nigerian does anything good, they will mention it briefly and when they do something bad, you will not hear the last of it. A friend then teased me that if I thought they were being unfair to us, I should bring out the good things Nigerians were doing. She was sarcastic with her tease.
I pondered on it and said to myself maybe that is what I am going to do. I came to Nigeria, took the pictures of the beautiful places that we have and the rest is history. So, from television programmed I decided to go into magazine, event programmers, fashion and the rest as well.

You have featured some politicians on your show, don’t you think you will be labelled partisan?
I feature ordinary people doing extra ordinary things. I feature anybody that is worth his or her salt. It is not just about politicians. It is a platform for airing people’s views. So if I talk to a politician, it is about what they are doing that I talk about. I have spoken to people from ACN, I have spoken to people from PDP, LP, and the likes. Its not like I am focusing on one party.
Having stayed abroad for a long time, how do you think you can objectively discuss, issues affecting Nigerians?
I am a Nigerian. I am not British. I have been back for over a year, but I lived here for over 20 years of my life. I am an average Nigerian, I don’t live in Lekki. I drive a regular car,  so I am still in tuned with what an average Nigerian feels. I am one of the masses. I also suffer NEPA black outs like every other person.  I suffer from noise and air pollution of the generators like everybody, so know what Nigerians are going through and I am qualified to talk about it.
What’s your family and educational background like?
I am a Yoruba girl from Nigeria. I came from a very religious background. My grandfather is Bishop Adeola Aboyade-Cole. I am the sixth in a family of seven. I am also a mother of three. I started my education in Nigeria from Aunty Ayo Preparatory Nur/Pry School, continued to Lagos African Church Grammar School and I did my A-levels in Ilorin. Then I moved over to England where I attended Institute of Legal Executives (ILEC).
My father passed away when I was four and my mother brought all of us up on her own. My mum is a disciplinarian who would not spare the rod when you misbehave. She is still very much around. You dare not misbehave when she is around. We call her two-in-one because she is mummy and daddy rolled in one.
So what did law have to do with TV presenting?
I think it was something God had in mind for me. Although I did ILEC, I did not do LLB. Despite doing ILEC, I never practiced law for one day. I went into immigration Law but never really practiced Law for one day in England because I was discouraged by the outcome of the job interview I went for. I went for job interview some years ago and they offered to place me on 12,000 pounds per annul.

After paying my monthly rent, what was left was just 1,000 pound. Anyway, that means the salary will not even pay for my rent because I will not get to take home a 1, 000 pounds a month because I would have taken less than that after tax. So, I decided that I was not ready to climb the ladder that way because I needed something that would take care of me and of my family. At that time, I already had my daughter and I didn’t want to do more than one job. That was how I decided to go into business.
You also are in charge of the podium Recognition awards, what is it about?
There are no winners or losers. We get suggestions, nominations and then we choose. Probably, we come out recognizing all the people who are making us proud but the fact that there is only one slot for one person this year does not mean that the person we did not recognize is a loser in that field for that year. The criterion is the fact that you have to do something not beneficial to only yourself but to others and Nigeria especially. A lot of people do not make us proud when they push drugs and they are caught.
They have given us such bad image that when you mention Nigeria, the first thing that comes to mind is the drug dealers, scammers and now they have even added suicide bombing to our not so good name. We are recognizing achievers in their various fields of endeavours, who are doing legitimate business and also encouraging others to emulate them, so when we are called fraudsters, we show them Femi Otedola. When we are called drug dealers we show them Mike Adenuga, and show them the positive sides of our people and country for every negative name we are called.