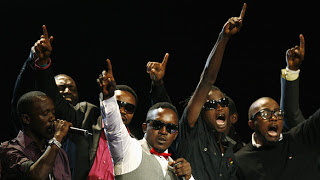 One postulation that has been confirmed in the music industry is that ladies love bad boy musicians.
And this explains why more often than not prim and proper musicians hardly find girls lusting over him, as the crave among the female folks now is for artistes with the bad boy persona.
From Timaya to Terry G, Inyanya, Wizkid, Davido, Olamide and KCee the story is not different, as these artistes some of whom are the rave of the music industry have loads of girls with both good and bad personality lusting over them despite the fact that they are treated like tissue paper.
(read more after the cut)

Wizkid attracts the largest number of ladies in this list, as it is common knowledge among his cronies that if the Star Boy beckon at a lady and she as much as thinks before coming another girl would immediately step up to his call.
Perhaps due to his finesse, youthfulness and money it is almost an anomaly to turn him down when he ask for anything.
The story of how Davido picks up girls from different events, takes them home and in the middle of the night throws them out of his room with statements like “you make my crib stink” has not discouraged more ladies from hanging out with him. As the rough treatment seems to be what attracts them to him.
His escapade with a University of Lagos (UNILAG) student remains vivid in the minds of a lot of people, as eventually the pictures of the artiste exploit with the lady eventually found its way to the internet.
Davido and Wizkid are however not the only artistes who are known to attract hordes of girls despite the shoddy treatment they dish out to them, as KCee will be remembered for his romance with Ebube Nwagbo and how he treated the lady.
Interestingly, despite the fact that KCee dumped Nwagbo for another woman, they still hang out together and share intimate moments when necessary even though the actress memory of how KCee treated her is vivid.

Inyanya is also not left out in the list of bad boy musicians who ladies just can’t get their hands off, as his “All I Want Is Your Waist” lyrics will remain conscious in the mind of Ghanaian actress Yvonne Nelson for a long time.
Though Inyanya humiliated Nelson in their short-lived relationship and even went on to say all he wanted from the actress was to use and dump her, this amazingly has not stopped other girls from finding him ruggedly attractive, or could it be because of his six packs, as often time when the artiste perform on stage ladies ask him to take off his shirt.
Timaya also joins this group, as the story of his romance with Empress Njama is quite impressive and according to friends of the two entertainers, Timaya allegedly severally beat up the actress, but she still refused to dump him, until her family intervened and they separated.
After Njama, Timaya dated a lovely lady who eventually put to bed for him. Before she gave birth to their child, the lady just couldn’t take her hands of the dark-complexioned artiste, as she went everywhere with him even the studio.
Olamide’s street credibility and his rugged attitude have seen him become one of the rappers who is mostly chased by ladies, even though the kind of girls he attracts are not often sophisticated.  It is also a fact that his vulgarity is another strong point that works for him, as ladies seems to enjoy his carefully chosen lines of profanity.
The master of them all is 2face Idibia, as the fact that the artiste has children from several women has not reduced the number of girls who flock around him.
In a recent survey conducted on a live radio programme ladies were asked if they liked the way 2face had children from different women and all the girls who phone in answered that it was only an unserious person that would live life like the musician. However, when they were asked if they wouldn’t mind giving birth to a baby for the artistes despite his status of having several children and baby mamas they all returned with a verdict of being ready.
While it is difficult to really explain what attracts these girls to bad boy musicians like bee to honey, it is safe to say that for now, this category of musicians are the one in vogue.
Posted by Unknown at 09:47