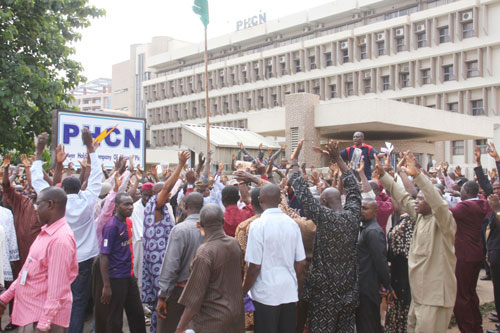 Omololu, Principal Manager, PHCN Abuja Distribution Company Wuse Zone 4, was arrested through a sting operation, following a petition filed against him.The petitioner had formally applied to purchase and install two transformers: a 100 KVA/33/0.415 KV and a 50 KVA/33/0.415 KV, and had filed his application through the Principal Manager (PC and M) at the said PHCN office.It was alleged that Omololu on receiving the application demanded a bribe of N100,000 for the release of one of the transformers and had subsequently taken the half payment of N50,000 from the petitioner.
(read more after the cut)

Infuriated by Omololu’s insistence on collecting the balance of N50,000 as condition for releasing the second transformer, the petitioner then turned to ICPC for succour and the Commission arrested the suspect after a sting operation when he collected marked money as balance.Omololu’s schedule of duties as a public officer include among others: protection of PHCN installations, testing of electrical equipment and preparation of permission letter for release of transformers, none of which required him to demand a fee from customers.The ICPC operatives were able to establish that the petitioner, indeed, submitted two applications for permission to purchase and install two specification of transformers 100 KVA/33/0.451 KV and 50 KVA/33/0.415 to PHCN, and that the petitioner collected one of the approvals upon payment of N50,000 demanded by the suspect.And that the petitioner was denied the second approval for his inability to provide the balance of N50,000.The PHCN official would be facing prosecution for allegedly contravening Sections 8 and 10 of the ICPC Act 2000.
Posted by Unknown at 01:03