How Nollywood actors fight over money and power 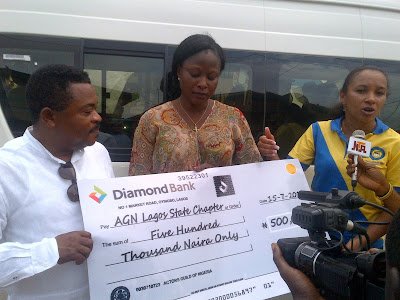 It is almost becoming a familiar tune to hear about fights and disagreements in guilds and associations of actors and movie practitioners. When the disagreements are not about elections, they are about funds. The endless circle of intrigues has affected not only the national bodies but also the state bodies.
At the moment, there are three issues rocking the movie industry and as you can guess, it is about money and power. These fights have escalated into verbal abuse and name-calling.
The most current one is about the N50million cheque that was given to the industry by the Governor of Akwa Ibom State, Godswill Akpabio. Soon after the cheque was given, there began a controversy over who has the right to take custody of the fund.
(read more after the cut)

The cheque was handed over to the secretary of the Actors’ Guild of Nigeria (AGN), Yakubu Abubakar; president of the Association of Movie Producers (AMP), Zik Zulu Okafor; film director, Andy Amenechi, and actress, Stephanie Okereke-Idahosa, who represented the Guild of Nollywood Stars.
Aside the Guild of Nollywood Stars, which is not a known body in the industry, every other representative at the cheque presentation was in order. But people from various quarters want to know how the money will be shared. There are other bodies like the Directors’ Guild of Nigeria (DGN), Nigerian Society of Cinematographers (NSC), Screen Writers Guild of Nigeria (SWGN) and Creative Designers Guild of Nigeria (CDGN), who all claim to be part of Nollywood.  Also, members of the Association of Nigeria Theatre Practitioners (ANTP), a group which houses most Yoruba movie practitioners are also asking questions.

National president of the Association of Nollywood Core Producers, (ANCOP), Alex Eyengho, said his body would go to court to challenge the donation because the recipients are not the absolute reflection of the industry called Nollywood, which the money is meant for.

“The Governor has exhibited how uninformed he is about the industry in doing so, I can bet you that the money will end in private pockets. Akpabio has succeeded in giving money to a clique and that is not representative of the industry. We will go to court to challenge this,” Eyengho said.

Defending the recipients of the cheque, former president of DGN, Fidelis Duker explains that there is “no drama” about the funds, saying that the “guilds have been given instructions on what the money should be used for.” He said all the guilds are been carried along in the process.

The governor had announced before he gave the cheque that the fund will be in form of a reward system for the best actors and actresses who do well in the movies and also for the best movies. As at the time of going to press, the governor was yet to release any fund. The cheque issued is merely a dummy for press pictures.

The second major issue splitting the industry is the impeachment of the Public Relations Officer of AGN, Frank Dallas. According to members of the National Executive Council, the allegations range from misuse of office to misappropriation of funds.

The council has instituted a five-man panel to probe the allegations and make a formal report to the guild. The panel, to be chaired by Mercy Salami, has other members as Hakeem Rahman, Cyril Ige, Elizabeth Ofuani and Barrister Rosemary Anifowoshe.

Speaking with Box Office, Frank Dallas, who was obviously upset about the whole matter, He explained that he was not impeached by anybody and all allegations against him are false.

President of the guild, Ibinabo Fiberesima, said she has proof of embezzlement and fraud not only against Dallas but also against the immediate past secretary of the guild, Emeka Rollas, and the chairman of the Lagos Chapter, Emeka Ibe Rising. The two were opponents during the election that made her president.

The Lagos State chapter of the AGN is not spared brouhaha. The newly installed president of the chapter, Victor Osuagwu, has not had a minute rest since he was named winner of the election.  He and the aggrieved loser of the state election, Don Pedro Aganbi, have continued to trade words, Don Pedro going on television to proclaim himself the chairman of the Lagos state chapter.

According to Osuagwu, “I see these people as frustrated people. Anybody willing to join the frustrated people is free to do so. In all my years in the industry, I never knew this individual. I only met him (Don Pedro Aganbi) on the day of the election. Anybody organising anything parallel to the new AGN is doing so at his own detriment.”

In a chat, Aganbi said: “The election as conducted by the AGNEC (Actors’ Guild of Nigeria Electoral Commission) on that day was in all ramifications favourable to me. Just before the elections were disrupted, I was leading the votes by a very wide margin and all of this is documented on video. Victor and his cohorts think they can steal my mandate, but I maintain my position on this. Even the outgoing executives led by Emeka Rising have recognised me as the new chairman.”

Former president of the Actors Guild, Segun Arinze, is not happy about all the developments.

“I must say that the attitude of some so-called members of our noble guild is becoming most embarrassing and must not be encouraged. Is AGN the only guild in Nollywood? Why must AGN continually be in the news for the wrong reasons?  Why do some people take delight in causing trouble and creating crisis in the guild? Is it their stock in trade? Why do those who claim to love the guild the most be the same ones destroying it?

“Now here’s my take in all of this, everyone kindly back off and let the president, Ibinabo Fiberesima, do the job for which she was elected.  Enough is enough. Stop this shenanigan,” he said.
Posted by Unknown at 01:40