Omawunmi beats up journalist, as they promise to ruin her career 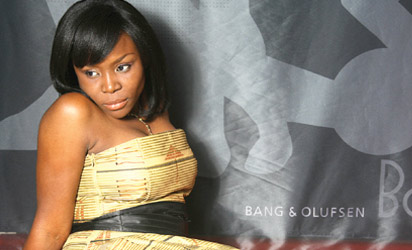 It seems our dear singer/single mum, Omawumi wants to remain a ghetto girl and continue to act as such. The babe has made some good money in recent times and as such one would have expected that her way of reasoning and actions would improved, accordingly. But that is not the case.

Her recent dirty fight with a guy in Lagos leaves one speechless:
It is gathered that the unfortunate incident took place at a public function recently. The guy, said to be a photo journalist, identified as Adekola Bamigbala, who was taking pictures of guests at the event, got to where Omawumi.
(more after the cut)

His attempt to take pictures of the female singer got him more than he bargained for, as Omawumi was said to have pounced on Adekola, grabbed his heavy camera and attacked him with it, leading to the guy loosing his balance. Many present were at a loss on why Omawumi had to attack an harmless photo journalist.

I hear the guy is carrying a swollen face and Omawumi has gone under, refusing to pick her calls or respond to text messages sent to her. When asked if he had any quarrel with Omawumi before, Adekola said there was nothing of such.
Meanwhile journalists across Lagos have decided to make Omawunmi's life and career a living hell. A Thisday reporter who was at the event says that she will make sure she never report anything concerninbg Omawunmi ever again. I even hear a court case is in the pipeline.
Posted by Unknown at 06:09