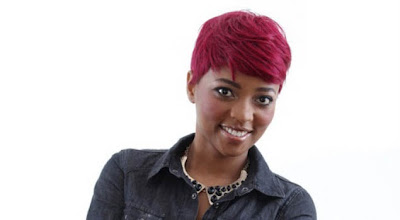 Melvin and Beverly are doing Nigeria proud - Feza
Feza is a singer and dancer from Tanzania. From the onset of Big Brother: The chase, she had been a very dominating character though she does not say this about herself. Last Sunday, she was voted out of the house. This she says does not come as a surprise to her since she was expecting to stay in the house for just two weeks. I had a phone chat with her, immediately she got evicted.
What was the first thing you did when you left the house?
I went clubbing. I have missed going to a real club.
(read more after the cut)

You were in the house almost to the very end. Did you think you would stay that long in the house?
To be sincere with you my brother, I never ever thought that I would be staying this long in the house. week after week, I was expecting myself to be nominated for eviction and finally be evicted. But week after week, I remained in the house. I must tell you, when I was coming to the house, the plan was just to stay a few weeks and that was it. If you had asked me then when I was coming into the house I would have told you that I can make it far.
So what was the strategy you used to survive the weekly evictions.
There was no strategy. I just live my life freely and openly in the house. There was nothing I will say I planned. I never strategized with anyone no one strategized with me. I was just there as an individual living her life and hoping at the end of the day, its either I get evicted or I go home with the money. So, staying this long is not a matter of strategy, maybe Africans and the voters out there liked me, I don’t know. I just went with the flow in the house
How was the experience in the house?
It is something I have never done before. It is a whole new world for me. I believe that until you go into the house before you can understand what the housemates are going through. But it is an experience I am glad to have been a part of.
If you were asked to go back to the house, would you?
No. I will never go back. Yes it was a lovely experience, but it is one I would rather no try again.
Now that you are out of the house, what is your next move?
Now I believe is time to concentrate on my music. The first thing I will be doing is working on concluding my album. There are already some artistes lined up right now for me to collaborate with. The hype is still hot right now, so I think there is no better time to push the music.
Would you collaborate with a Nigerian?
Oh my, if I have the chance I will. If I get the chance to collaborate with a Nigerian artiste sure I will. I will wait for Melvin to leave the house so he can set it up for me. I hope Nigerians will be ready to welcome me with Fufu.
What kind of music do you do?
I am a soulful person, and I love songs that really mean something to people who listen to them. I also have a lot of love for rap and hip hop music. I have explored the genre a lot. but when my album comes out, it is going to be more eclectic. There will be something for everyone who listens to it.
How do you see the two Nigerians in the house?
They were both cool. Yes I know that Melvin was one of those who nominated me for eviction but I do not have any bad blood against him. I didn’t take that personal. We are all playing the game. On the whole, I think the two Nigerians are doing well in the house, they are great people. They have not disappointed their country. I got on along with them fine.
If it was up to you to choose who to win the show, who would you pick. They are all strong characters, and anyone of them can end up as the winner. but I have a feeling that Angelo will eventually be the winner. He is a strong contender and he is not a fake person. He plays the game without being crafty or tricky. Also,I think Bimp has a good chance.
Bimp? He is seen as one of the week housemates
Really? Well, I am not sure how people at home see us in the house, but I think Bimp is a strong character and he can hold his own. I will not be surprised if he eventually wins.
To your relationship with O’Neal, that was a good show the two of you put up
(laughs) It was not a show, it is real. We really had feelings for each other, it had nothing to do about winning the game. I still feel for him and I believe there is a possibility that we could continue a relationship even after the house.
Do you think he feels the same way too?
To be sincere I don’t really know. I think there were times he must have thought that I was getting too close to him just because I wanted to have a good chance in the house, but over time, he must have realised that was not the case. He is a smart man, and I like smart men.
Do you think Africa voted you out to be with Feza?