My husband knows that men toast me - Thelma O'Kaz 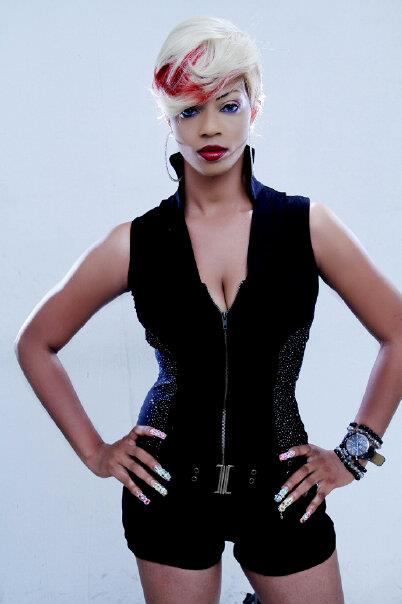 Thelma Okhaz is both an actress and a musician. She is mostly known for her wild looks and compromising positions she assumes while acting. It would be difficult for one to believe that behind that in-your-face appearance, Thelma is a cool calm and collected wife with four kids. I met her at an event and they had this chat
Omotola was just honoured by her colleagues, how does that make you feel as a female actor?
I am very proud of her. I am happy to be in the same industry with her. For her to be singled out by Time Magazine, it shows that she is doing something right. It also shows that our industry is regarded in the outside world. I am proud of her. She is a sister to me, and I believe she has opened up the way for many of us to be recognised by the outside world.
What was it like the first time you went on set?
I felt at home. You see, I don’t know how to explain it but whenever I face the camera, it is like I am home doing what I was born to do. I love the camera.
(more after the cut)

What were your challenges as an up-and-coming actress?
There is nobody who did not face one challenge or the other.  I don’t think it is possible. Frustrating moments include those times when you know what is inside of you and what you are capable of doing but you are not given the opportunity to prove yourself unless you fight for it. I keep telling people not to take acting as their only source of income or livelihood because if you do, you might end up disappointed!
Which is the most difficult role you ever played?
I think I am yet to act my most challenging movie. There is no role I have played yet that I have not been able to get into character with. I think the one that actually shook me a bit was a movie where I had to act as a woman with breast cancer. I had to go to Federal Medical Centre to see women with breast cancer. What I saw was depressing, and it put down my spirit. But I did not let how I felt got into the job. I was able to act the role perfectly. I fact I thank God that I went to see women suffering the disease because I don’t think I would have pulled it off.
You are also a musician when will you be releasing your album
As for album, I am still working on that. It may not come out soon. For now I am releasing singles. I just released my single, ‘I Like the Way’, which has been on rotation for quite some time now. I am done shooting a video with Patrick Elis. We are now editing it. Also I just finished doing a movie alongside top actors like Yul Edochie and Clem Ohameze, which will soon hit the cinemas.
Why music?
I have been in music since I was a child and I have been doing sound tracks for years. A lot of people have inspired me and one of them is Michael Jackson. He inspired me because he sings songs that expose and address problems in the world.
You are married with kids, can you describe your husband?
He is handsome, God fearing and hardworking.
How long have been married?
I have been married for 13 years and I have four kids; it’s hard for people to believe.
As a married woman how do you lead such a public life without, doesn’t it clash sometimes?
I don’t know about clashing, I think I know by now how to handle my family side by side my job. I don’t let any of them interfere with each other.
What about men that admires you, you male fans
Yes, I have male admirers, every woman has one admirer. Even the woman who sells fish in the market has an admirer, she has her own toaster. Every woman has someone toasting her, so it is only normal for me to have admirers too. For me, I make sure that I am very careful and mild when I tell them off. I say well, I appreciate it that you find me attractive but no, I cannot date you. For my husband, he knows and understands the kind of job I do. He knows that there will be men out there that will toast me but he is trusts his wife. He knows that it is a calling for me to be in the entertainment industry.
Have you been tempted to cheat on your hubby?
No, because I am contented with my husband. He is handsome and caring. I can’t be tempted to sleep with another man.
What is the worst thing a fan has done to you?
Ah, I remember an event that happened some months ago. I went to the market to buy some things, and a woman walked up to me and asked, if I was Thelma Okhaz. I said I was. She said, “I thought they said you are married”, I said I was. She said, “you are not ashamed of yourself. See the way men touch you in your movies.” After raining insults on me, she just walked away, and people were staring at me. I was so embarrassed. When I got home, I thought it over. I believe I must have acted my part so well that the woman could believe that I was doing it in real life. I saw what she did as a confirmation that I am good with what I do.
What was it like growing up
I come from a polygamous family. We children are 13 in number and the wives are four . My mum was the third wife. Growing up was fun. My dad was a very funny person; he personally did manicure for his kids and groomed our hair among others. Interestingly, he wore his hair like woman. My father was not a rich man but we were comfortable and didn’t lack much.
Some say you are a half cast
Oh no. I am not. I am 100 per cent Nigerian. I think it has to do with my personality. I cannot change the way I look. I like to dress well and I don’t talk much. I allow my appearance to speak for me. The fact that I am light in complexion makes matters worse because people think you are bad and wild so they keep away from you. I have heard stuff being said about me a lot of times but I am not bothered. I am Nigerian to the core.
Do you like playing bad girl roles?
The truth about acting is that if you look like a wild babe, you would attract wild babe roles. You get the bitchy or manmade role because of your appearance; it’s not like one really likes such roles.