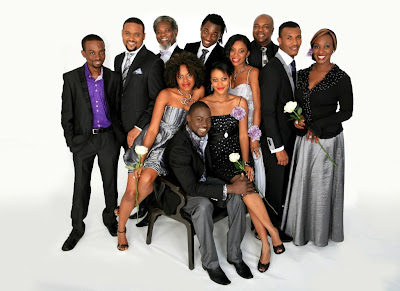 From what we gather, a storm is brewing amongst the Tinsel family. Some of the actors we hear are not happy with the MNet, the producers of the award winning soap opera. From indications, some actors have made their grievances known to the media outfit.
Though details is yet unknown, some actors are not happy that their status are not upgraded in the show despite their long time participation in the show. One of the actors who craved anonymity disclosed that despite the fact that he takes more roles than others, he is still regarded as a day actor and pay is far less than those who takes on smaller roles.

He also gave the exit of Kunle Coker from the show as a big example. Veteran actor Kunle Coker plays the role of Ziggy, a bar owner and ex-boxer in Tinsel. Just last week, he was pronounced dead in the show. Meaning he will never appear on Tinsel again. From the source, the Kunle Coker was having issues with MNet concerning his role and income, and that is why he decided to take a hike. Kunle Coker on the other hand is yet to make a statement on the issue.
While speaking with Yinka Epega of Multichoice, she explains that some ‘day-actors’, or supporting actors sometimes have issues just because they are not getting enough exposure like the lead actors. “Because you act everyday does not make you a lead character. Each person’s role is highlighted in their contracts which they agreed to. If they have issues, they should speak with the producers instead of trying to create a story out of it. They have a good opportunity being given a Continental-wide exposure, they should do something with that,” she says. She also explained that Kunle Coker was not fired from the set despite all indications.
Tinsel which is in it’s third season has turned out to be one of the biggest television production in the country. Both crew and cast are strictly African, and with it’s popularity it has become a household name across the continent. It is centred around a town where movies are made, and most of the characters has an affiliation with movie production outfits. The programme has bagged many broadcasting awards around Africa.
Posted by Unknown at 06:24