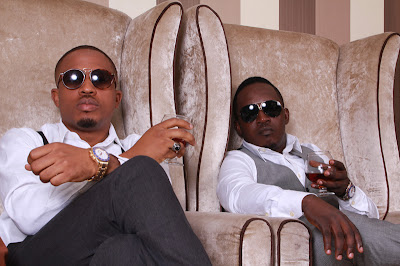 The headliners for the 2012 edition of Hennessy Artistry have been announced. Hennessy Cognac revealed today that rappers M.I and Naeto C have been selected to front this year's Hennessy Artistry project.
Hennessy Artistry is an annual project that promotes the blending of cognac with cocktails, music and entertainment, and facilitates experimental collaborations between Nigerian artists, providing a much-needed platform for them to express themselves.

“Every year, we look back and see how much Hennessy Artistry has evolved”, says Hennessy Marketing Manager, Tokini Peterside. “It's been a fulfilling journey these past five years and we are proud to have worked with so many of Nigeria’s most talented musicians. This year’s project is even more significant because we are facilitating a collaboration between two uniquely gifted artistes who to date, have never worked together as a duo.”
As is characteristic of Hennessy Artistry, M.I and Naeto C will record a track together, shoot a video for the track, and perform for fans at different venues across Nigeria.
“I’m definitely excited to be part of this year’s Hennessy Artistry train,” says Naeto C, a best-selling rapper and hit-maker who with hits like ‘Kini Big Deal’ and ’10 over 10’ has influenced Nigerian street lingo more than anyone in his category. “This is my first time as a headliner on Hennessy Artistry, and it's exciting for me because it is a good platform for artistes and the brand also adds great value.”
A prized act at Chocolate City, M.I is no stranger to Hennessy Artistry. He says his third outing on the project is “pleasantly surprising and humbling”. Critically and commercially acclaimed, M.I has won millions of fans for rap music in Nigeria, taking the genre and culture to heights hitherto unreachable.
This year’s Hennessy Artistry project will be the first time that M.I and Naeto are performing together as a duo, and they have promised to deliver the most exciting Artistry track and music video to date. The highly anticipated combination of both hip-hop artistes on Hennessy Artistry is expected to bring forth remarkable music, while creating never-seen-before experiences for fans across Nigeria.
“It’s an incredible honour to be part of this year’s Hennessy Artistry. This is not my first year on the project, but it makes me feel I must be doing something good career-wise. What do you get when you lock M.I and Naeto C in the studio? No one can predict that, I tell you - and I'm sure you all can't wait to find out. I certainly cannot wait to reveal what we have been working on. Hennessy Artistry this year will be epic,” M.I says.
Launched globally by Hennessy in 2006, Hennessy Artistry is an innovative music platform that was created to showcase ‘the art of blending’ by celebrating the vibrant multiculturalism of different music genres - contemporary, hip and inspirational sounds from around the world. Hennessy Artistry kicked off in Nigeria in 2007, with a cocktail mixing contest among renowned bartenders. In 2008, the project pitched some of Nigeria's best disc jockeys against each other in a DJ Battle. In 2009, Hennessy Artistry organized an urban music contest for up and coming artists, which was won by Ice Prince ‘Oleku’ Zamani, who has since gone on to become a major artiste. Hennessy Artistry then orchestrated in 2010 the comeback of Sir Shina Peters, and grouped him on a multi-genre collaboration effort titled ‘Like a Bottle’ with artistes Bez, Nneka, Ice Prince and M.I. A second collaboration track and music video followed in 2011 titled ‘Toast to the Good Life’, which featured Tiwa Savage, Banky W and Eldee the Don.