Men beaten to death while trying to hijack plane 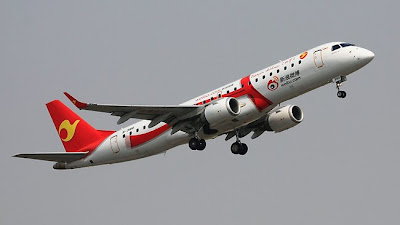 TWO men who allegedly tried to hijack a plane in China were beaten to death by passengers and crew.
The Global Times newspaper reported that two of the suspects died in hospital from injuries they suffered during the ensuing fight with passengers and crew on board.
The men were part of a six-strong gang involved in the foiled hijack of a Tianjin Airlines flight bound for the regional capital of Urumqi last Friday.
Just minutes after the flight took off from Hetian, southwest Xinjiang, the men, all aged between 20 and 36, stood up and announced their plans to terrified passengers.

The gang reportedly broke a pair of aluminium crutches and used them to attack passengers while attempting to break into the cockpit, Hou Hanmin, a regional government spokeswoman said.
They were tackled by police and passengers who tied them up with belts before the plane, carrying 101 people, returned to the airport safely just 22 minutes later.
Hanmin added that police were still testing materials they had been carrying, thought to be explosives.
The men were reported to be Uighurs, the local Muslim ethnic minority. There have been clashes between authorities and Uighurs resentful of government controls over their religion and culture.
Dilxat Raxit, spokesman for the German-based World Uyghur Congress which campaigns for Uighurs’ rights, said that it wasn’t a hijacking attempt, rather an in-flight brawl over a seat dispute.
“We warn China not to use this incident as another excuse for crackdown,” he said in an emailed statement.
Two more suspects are reportedly being treated in hospital after mutilating themselves.