What is Tee-A up to again? 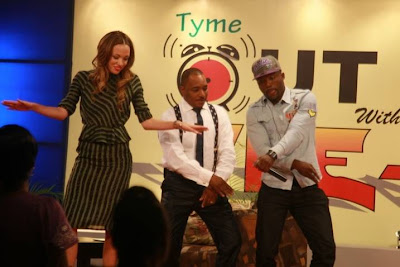 Tee A has announced the kick off of a new season of his hugely successful TV show Tymeout With Tee A.
The comedian-entrepreneur, who combines his busy career as a compere and hospitality executive with producing and presenting the syndicated show, says fans all over the continent and beyond are in for a helluva time.

Shot for several weeks in April, the new season of TOWTA will feature star appearances from big names like Onyeka Onwenu, 2face Idibia, Eku Edewor, Samklef, TWO, and many more.
Regular fan favourites 'MC Abbey' and 'Madam Princess' also return on this spanking new season with fun, daring sketches that will move audiences to 'laugh and lose control' according to Tee A.
TymeOut with Tee A is a variety comedy show that broadcasts on several TV networks in Nigeria, Ghana, England, Kenya and parts of the US.
The first episode of Season three airs today (Wednesday July 4) on TVC (8:30pm), featuring Studio 53 Xtra presenter and top model Eku Edewor while Kukere star, Iyanya performs and teaches everyone the wildly popular Etighi dance.