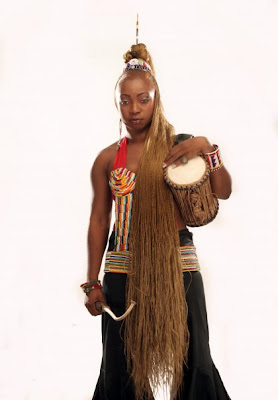 If you want to know to what length a mother would go for a child on the verge of seeming self-destruct, ask Alhaja Monsurat Olumuyiwa, the mother of acclaimed talking drummer, Aralola, the story of how she almost fell victim to convicted, infamous man-eater, Clifford Orji, because of Ara. Some days before the lid was blown off his nefarious activities, Olumuyiwa had typically gone in search of Ara who had made the studios around their neighbourhood her second home. While recalling her stories of sacrifices and sufferings and narrow escape on this week’s edition of the Supermom Celebrity show, she says, “All her brothers are graduates; she was the only one who said she was dropping out of school to concentrate on music. I and her father could not reconcile with that because she could have acquired whatever degree she wanted but Ara chose music.”

On one of those heady days, Ara had characteristically not returned home and there was no GSM in the country then. Out of sheer maternal instinct, Olumuyiwa hopped into the car with one of Ara’s brothers behind the wheel. She was desperate to find her only daughter. She was however less concerned not oblivious to the danger that lurked in the eerie darkness of mid-90s Oshodi, Lagos. Her child means so much to her. As they inched towards the Charity bus stop where Orji reigned supreme, two flashlights emerged, flagging down the Olumuyiwas’ car a la policemen. Time was around 1am. The hosts of heaven had retired for the night. And the hounds of hell had taken over. But fate had decreed that the hapless matriarch would not make up the numbers on Orji’s list of victims. As the car slowed to a roll, two men on either side of the road maniacally ran towards it. Instinctively, Olumuyiwa knew these were no policemen and just as the assailants made to open the car, she screamed and her son stepped off the brake as the car gathered frenzied speed in nano seconds.
Still, she went in search of Ara that night. Thankfully, today, Ara, with her signature mermaid-like hair is the most decorated and recognized talking drummer from Africa. She has toured the world extensively, performed for the Queen of England and President Bill Clinton at different banquets; and performed alongside global music icons like Stevie Wonder and Wyclef Jean. She is a holder of the Freedom Key to Miami-Dade County, USA. With the benefit of hindsight, it was not by accident that Ara (meaning mystery or wonder) was so named. Her mother recalls that she knew from when Ara was a baby that she was an unusual child. “She started walking by the time she was seven months, which is a rarity till this day and yet, had no tooth. So, when people are visiting, I would strap her to my back so that people won’t see her walking and start asking questions. But I thank God for what and who she is today.”
But the colourful singer drummer who hails from Ondo town in Ondo State isn’t the only one with a Supermom. On this episode also, Chico Ejiro, one of Nollywood’s most respected producers, with a repertoire of about 500 movies, says he owes his success and that of his siblings; Peter and Zeb, pre-eminent filmmakers, to their mother’s relentlessness, Mrs. Eloho Susan Ejiro. A hard working woman who was forced to train her three boys all by herself after her separation from her husband in 1971 while in Equatorial Guinea, she went through the entire gamut of sufferings without letting her faith flag. The challenge of taking care of three boys alone plagued her that she engaged in all manners of trading. She sold garri, ogogoro and even her wrappers to raise money for her children’s fees. Borrowing became the order of the day since all the money she made from her sales put together wasn’t enough to pay for their fees. But she ensured that they went to school against all odds. In the midst of their penurious existence, she knew her kids were entitled to some form of leisure. Thus, because she had no television in the house then, she would take her children to the cinemas whenever she could. Unknown to her, she was unconsciously arousing a passion in their heart for the movie industry. Today, the three brothers have made their names as Nollywood greats and they are stopping at nothing to show their Supermom how grateful they are for weathering those stormy and uncertain years. The Supermom celebrity edition airs on the prime time and network belt of Africa Independent Television on Saturdays, and on many other terrestrial television stations across the country.