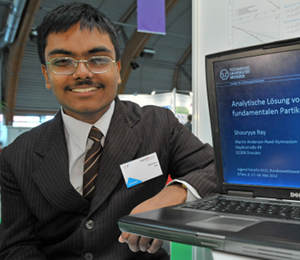 A GERMAN 16-year-old has become the first person to solve a mathematical problem posed by Sir Isaac Newton more than 300 years ago.
Shouryya Ray worked out how to calculate exactly the path of a projectile under gravity and subject to air resistance, The (London) Sunday Times reported.
The Indian-born teen said he solved the problem that had stumped mathematicians for centuries while working on a school project.
Mr Ray won a research award for his efforts and has been labeled a genius by the German media, but he put it down to "curiosity and schoolboy naivety".
"When it was explained to us that the problems had no solutions, I thought to myself, 'well, there's no harm in trying,'" he said.
Mr Ray's family moved to Germany when he was 12 after his engineer father got a job at a technical college. He said his father instilled in him a "hunger for mathematics" and taught him calculus at the age of six.
Mr Ray's father, Subhashis, said his son's mathematical prowess quickly outstripped his own considerable knowledge.

"He never discussed his project with me before it was finished and the mathematics he used are far beyond my reach," he said.
Despite not speaking a word of German when he arrived, Mr Ray will this week sit Germany's high school leaving exams, two years ahead of his peers.

Newton posed the problem, relating to the movement of projectiles through the air, in the 17th century. Mathematicians had only been able to offer partial solutions until now.

If that wasn't enough of an achievement, Mr Ray has also solved a second problem, dealing with the collision of a body with a wall, that was posed in the 19th century.

Both problems Mr Ray resolved are from the field of dynamics and his solutions are expected to contribute to greater precision in areas such as ballistics.