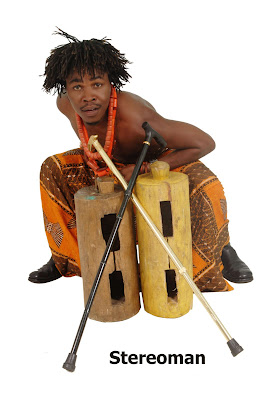 Raga Rasta musician, Sunday Ekwe, popularly known as Ekwe SAMPLE, is in police custody for allegedly killing his lover, Rukayat Idris.
Ekwe was arrested by homicide detectives attached to the State Criminal Investigation Department, Panti, Yaba, Lagos on May 9, 2012 following allegation that he strangled and killed Idris in her Honda Civic car on April 13, 2012.
According to police sources, Idris, a mother of two, was found dead in her car under the bridge close to the Trade Fair Complex Bus Stop on the ever busy Mile2-Badagry Expressway around 8pm.
Her corpse was discovered by passers-by who alerted the police at the Trade Fair Police Station.
The car was allegedly first noticed at that spot in the afternoon of April 13, 2012.
Idris' remains has since been deposited in a mortuary, with autopsy to be carried out.
The police said there was no gunshot wound and investigation so far revealed that nothing was stolen from her.
However, there were marks on her neck, which indicated that she was strangled.
Ekwe, who has separated from Idris before the incident, was fingered by her lover's family as the suspect in the presumed murder. (read on)

Sources closed to the estranged couple told the police that Ekwe and Idris have been separated for close to a year over issues of constant quarrelling and battering.
It was gathered that Ekwe moved out of the apartment at the Central Bank of Nigeria Quarters, Satellite Town, Lagos, which he shared with Idris and their child, a girl, following his low profile life after his finances dwindled.
One Rasta Mumen, a close friend of Idis's, told the police that Idris was abandoned and has been squatting with friends after the rent at the CBN Quarters ran out last year.
Mumen also told the police that Idris, an indigene of Kogi State, left her child with her that fateful day for the market but never returned home.
Sources close to the family added that after the police discovered Idris’s corpse, they informed Ekwe but he showed no concern.
“It was Ruyakat’s sister who came from Port Harcourt that identified her body and made the complaint, because when Ekwe was called that  Ruyakat’s corpse was found in her car, he showed no remorse or came to identify her,” the source, who requested anonymity, said.
It was further gathered that popular rasta musicians such as Daddy Showkey, African China among others have shown their solidarity with Ekwe as they came to visit him in the cell at Panti last weekend. Eagleonline