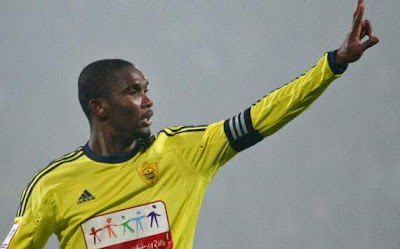 That Samuel Eto'o is the highest earning African footballer is really not news, the Anzhi Makhachkala striker struck pay day with his move to Russia last year.
The surprising transfer to the Eastern European country effectively made the former Inter and Barcelona forward the highest paid footballer on earth.The May edition of Forbes Africa has listed the Cameroonian’s weekly wages as $554,000, and $28.5 million annually.
This dwarfs the annual salary of second-placed Manchester City midfielder Yaya Toure who previously held the top spot. Toure takes home an annual salary of $17.6m and is the highest paid player in the English Premier League.
Yaya confirmed his billing with his recent exploits that helped the Citizens win their first league title in 44 years.
Tottenham Hotspur’s Emmanuel Adebayor comes in third place with an annual salary of $14m. His weekly wages are put at $268,000.

The Togolese international has refused to join Spurs on a permanent basis from Manchester City after turning down a pay cut stating that he runs a lot of projects back home that require him to earn as much as he can.
Tied for fourth place is Manchester City’s Kolo Toure who earns $9.9m annually. The older Toure takes home $191,000 a week.