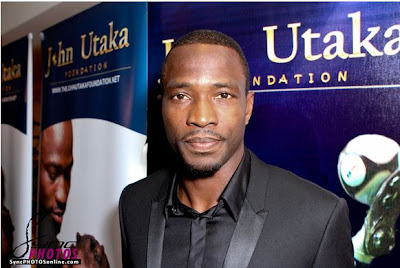 John Utaka is from Nigeria. He has played for several clubs across three continents, first for Arab Contractors and subsequent-lyIsmaily of Egypt, then spending a season playing for Al-Sadd of Qatar, before joining Racing Lens and later Rennes in France. John Utaka struggled to make an impact at the start of his Rennes stint.
Howev-er, he took advantage of the absence of fellow striker Alexander Frei through injury to make his break-through. In February 2006, he scored two consecutive hat-tricks, against Lens and Lyon, and as a result received L’Equipe’s player of the month award.
John joined Portsmouth on a four-year deal in July 2007, for a fee of around £7,000,000. He scored his first goal on 11 August 2007 in a game against newly promoted Derby County.

Some sources claim he became the club’s record signing. On 17 May 2008, Portsmouth won the FA Cup with a 1–0 victory over Cardiff City. Utaka provided the cross for the winning goal which was scored by Nwankwo Kanu. On 29 January 2011, Utaka signed for French first division side Montpellier, agreeing a two-and-a-half year deal for an undisclosed fee
John on the 6th May 2012 officially launched his charity organisation. He emphasised that the charity is dedicated in helping to educate and empower less-privileged children and youth. The president of Nigeria Football Federation, Aminu Maigari who was earlier paraded on the red carpet, highlighted the former Portsmouth player’s immeasurable performance while playing for his country. Aminu expressed his happiness to witness the launch of the John Utaka Foundation which is de-signed to tackle poverty among children through the provision of basic amenities such as water, food and medicine to the less fortunate.
Other stars and VIP guests in attendance were Queens Park Rangers defender – Danny Shittu, special guest of honour – Retired brigadier Julius Maada Bio – the Sierra Leone People’s Party presidential aspirant, Ex Nigerian International, Efe Sodje, The Chairman of Sodje Sports Foundation – Steve Sodje, Nottingham Forest defender – Sam Sodje, Peter Utaka, Dickson Etuhu, Sam Sodje, Steve Sodje, Hayden Mullins and Benjani of Portsmouth FC, Mark Wright of BBC 1 Sports, Babatunde Loye, Inem Coker, Nollywood star – Bob Manuel Udokwu, Akin Salami, Pauline Long, TOSH Mag & TV Publisher – Shoggy Tosh, Femi Okutubo, May Seven, Mrs Ijeoma Udechukwu, Miss Tutu, Miss Theodora Ibekwe, Miss Vannessa Amadi, Michael Djaba, Usman Abubakar, OH TV, Nollywood TV, Voice of Africa Radio and others.
John Utaka attributed his progress in his career to God’s blessing and hard work on his part. Whilst appreciating the attendance of all these guests that came to support him, he further illustrated that his foundation represents his belief in helping and empowering the youth of today for a better to-morrow by providing grants and working in partnership with registered charities that help disad-vantaged young people to play a fuller role in communities throughout the UK, Nigeria and overseas.
MC Mark was the Master of ceremony of the night and he co-ordinated the raising of the funds for the charity. Donations were made by guests comprised mainly of professionals in the media, movies and entertainment. The Barclays Bank donated the sum of 15,000 pounds and Air tickets with splen-did travel packages were ‘auctioned’ as well. There were stage performances by May7ven, Sura Sus-so, Sister Zyta, Carol Jiani and Rebecca Arthur that wooed the crowd throughout the night. Asakeoge a fashion designer with her gorgeous models also performed a cat walk on the night with her ‘Afrolosophy’collections.
According to Fatima Jabbe, an ambassador to the John Utaka Foundation, the proceeds from the pub-licised dinner and fundraising event will be used practically to kick-start the objectives of the foun-dation especially towards help-ing mentally and physically disabled children in Africa. “This banquet event having celebrities from the football, movies and business worlds in attendance has shown that the foundation will be spurred to do more for the less-fortunate in our African society.”