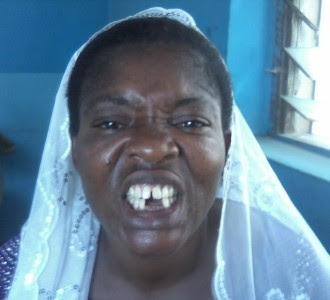 A middle age man, Monday Ekpo, is in police custody for allegedly assaulting his neighbour and removing her front teeth.
The suspect was arrested at the weekend following complaint by one Mrs. Ebere Ogbonna that Ekpo beat her to a stupor following her refusal to date him.
Ebere, a widow and a mother of nine boys, told police officers attached to the X Squad at the Lagos State Police Command that Ekpo had threatened to kill her and her efforts to get police officers attached to the Iponri Police Station to arrest him proved abortive as Ekpo is said to be a warlord at Ilaje Otumara Mainland, where the suspect and the victim reside in the same premises at 15, Fatiregun Street.
She said: "I lost my husband some years back and I have been struggling to fend for my nine boys.
"I had twins three times and since their father died I have catered for them.

"Sometimes last year, Monday asked me to date him but I refused but for more than three occasions, he attempted to rape me in my one room apartment.
"We are neighbours.
"He was bent on sleeping with me but I told him I was not interested.
"This angered him and he told me he will make my life a living hell."
Ebere narrated how Ekpo  allegedly assaulted her and removed her three front teeth.
She added: "On April 5th, I attended a friend’s child naming ceremony.
"Monday was there and he attacked me, saying that he was the chairman and I should leave.
"He pushed and shoved me out of the room and as I resisted him, he  slapped me on the face.
"I went to report him to the elders in the community and as they called him to warn him from assaulting me, Monday descended on me and beat me to a stupor. "Sympathizers took me to the hospital where I later woke up and found out that Monday had removed my three teeth."
Following the assault, the case was reported at the Iponri Police Station but the officers were said to be biased in handling the matter.
Agbodimu Musbau, the Community Development Association chairman of  the Otto/Otumara slum, where the incident happened, said the community was appalled by the incident.
Agbodimu said: "Ebere is a widow and also a member of the vigilante group in the area.
"When the matter was reported, we took it up and arrested Monday and handed him over to the police at the Iponri Police Station.
"But we were shocked when Monday was released the same day as his gang  went to the police station to threaten the officers to release him or face their wrath.
"It was even sad when Monday started bragging that no policeman in the area can arrest him.
"So that was why we brought the matter to the Lagos State Commissioner of Police so that we can get justice and we are happy that the CP, Umar Manko, acted prompted and Monday and the IPO have been detained over the assault of a helpless widow."
Ebere said she is still in great pain following the beating she received from Monday.
She said: "I feel pain all over my body and whenever I talk, blood comes out from my mouth and my chest hurts badly.
"I have been to hospitals but I am yet to recover.
"I want to live long to care for my nine boys but the pain I feel is terrible and I want justice because since this incident happened, I have not gone to the house as Monday and his gang have threatened to kill me."