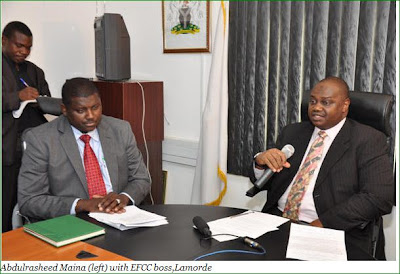 Mr Abdulrasheed Maina, The chairman, Pension Reform Task Team, shocked officials of Independent Corrupt Practices and Other Related Offences Commission (ICPC) on Thursday with the revelation of how the pension reform task team caught a high ranking civil servant in the pension unit at the office of the Head of Service with of N2 billion stashed in his private residence.
The Head of Pension Reform Task Team while updating officials of the Independent Corrupt Practices and Other Related Offences Commission at the ICPC national headquarters on the progress by the team in recovering looted pension funds, disclosing that the team had recovered the total sum of N151 billion meant to have been looted by officials responsible managing the pension funds.
Mr. Maina also narrated how another civil servant was caught with ’a pile of dollars’ in his house.

He emphasized that some government officials had over the years been involved in senseless looting of the pension arrears of helpless retirees, many of whom had died while many others were stricken with ailments arising from denial of their pensions by government officials.
He said the offenders had been arrested and were already undergoing the process of prosecution.
He added that those arrested so far had had the properties they bought with looted funds, including private buildings, offices, hotels, shopping malls, confiscated by the Federal Government.
According to him, the team, in conjunction with the EFCC, had traced and recovered a total of N35 billion and another N15 billion worth of properties from the “very few corrupt government officials in the office of the Head of Service, Pension Department.“
The acting chairman of ICPC, Ekpo Nta, expressed happiness at the activities of the Reform Team.
Mr. Ekpo vowed to ensure that anyone found culpable of mismanaging the pension arrears would not go free, just as he said ICPC would like to bring the outcome of the intervention by the Reform Task Team to the public domain.
Posted by Unknown at 12:21