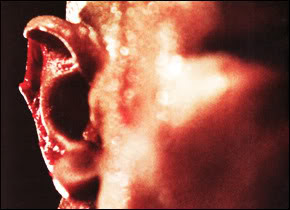 (metro news)Residents of 94 Idikoyejo Street, Ijeshatedo, Lagos, on May 1 were shocked when what began as a verbal exchange between two women, Mary Eze and Tawa Nurudeen, who were neighbours, resulted into a physical bout which ended in an ugly manner when the latter’s brother, Idris Nurudeen, joined in the fight. By the time the dust settled, Mary Eze, a young mother, had lost one of her ears, allegedly bitten off, by the 21-year-old Nurudeen.
The Igbo woman narrated the turn of events from her own perspective: “I was washing my clothes on Monday; at a point, I went into my room.
By the time I came out again, I found that someone had tampered with my clothes. After I had shouted for a while, Tawa affirmed that she was the one that touched my clothes.

I challenged her: why would she rummage through my clothes without my permission? We exchanged hot words for a while and I went angrily into my room. I was inside my room, when her brother, Nurudeen, suddenly came in, hit me in the face and bit me in the ear until a part of my ear was cut off.’’

Nurudeen in his account averred: “She and my sister were fighting. Then it was just verbal arguments. I went inside to call my mother to intervene. My mother came out and was talking with the woman. I didn’t know what came upon the woman; abruptly, she grabbed my mother’s neck, and my mother suffers from high-blood pressure.  I asked her to leave my mother alone; instead she grabbed me in the crotch, and then bit me in the navel. That was all. I didn’t touch her. I didn’t know how her ear got cut.”

The case, reported to the police, is already in court at Mushin Local Government Magistrate Court. During the first hearing the next day on May 2, the petitioner, Mary Eze appeared with a piece of her dismembered upper ear wrapped in black polythene nylon as evidence, while the injured ear was heavily bandaged.

Before the case was adjourned till June 6, the magistrate asserted that the respondent could be bailed with the sum of N100, 000 among other conditions.