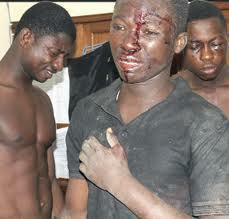 *The Lagos State Police Command apprehends 11 armed robbery suspects, 5 bank staff – including a Senior of GT Bank, Gbagada Branch). *The GTB senior staff conspired with a security guard of the bank and 3 other staff to Rob a customer depositing Nmillions in their Bank. *The top banker invited one Sadiq (a notorious armed robber), who recruited 6 other members of his gang for the operation. *Gang procured guns in Lagos and ordered the rest from Edo State.
Two pistols were already concealed in the bank’s Computer Central Processing Unit with plans to use them on the day of the robbery. *Police Intelligence Report got information about the planned robbery and position their officers on the D-day. *Sadiq wore a kaftan, other Robbers are in suits and smart wears, while plain-clothed policemen had cordoned off the area. The police started picking the robbers and their weapons few minutes to the commencement of their robbery operation. KUDOS To the Police Officers involved in this Operation.