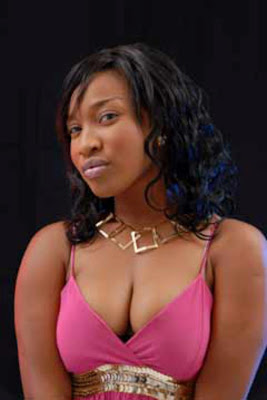 After many years of denials, controversial actress, Tonto Dike has finally agreed that she was indeed a smoker. She accepted the allegations by claiming she has just quit smoking. On her Tweeter page, on Monday morning, she said that she had good news for her friends and well wishers, then she announced that she had quit smoking.
"I have good news for those who wish me well.  It's a silly good news but you all are going to love this. I quit smoking.” Despite her numerous denials, those close to her knew that cigarette smoking was becoming a problem to her. She was said to finish a pack of 20 sticks before noon every day. The effect of it is clear from her voice, and darks lips which she easily covers up with lipstick.
Last year, Tonto was in a bitter war with fellow actor, Van Vicker when she reportedly puffed cigarette at. Many of her colleagues had been advising her to cut down on the habit. Though industry people were aware of her addiction, she would fight tooth and nail with anyone who says she does smoke. She had rained insults on a journalist who reported on her smoking habit, while maintaining that she does not smoke. So it came as a shock when she tweeted that she did not only reduce, but claims to have totally stopped smoking all together.
Tonto came into the industry in 2006 with a daring start. She had like her colleague, Cossy, showed some skin, to get attention. Unlike Cossy though, she did not do it wildly, she acted timid with an innocent looking face. She quickly got attention. Today, she has proven that she is indeed a good actress, and she has over 50 movies to her credit.
Posted by Unknown at 07:35