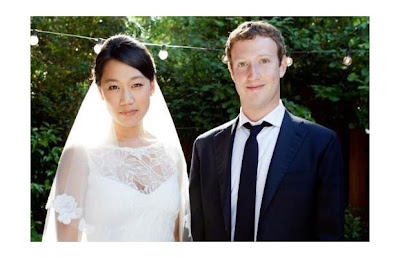 Facebook co-founder and CEO Mark Zuckerberg wed longtime girlfriend Priscilla Chan on Saturday, announcing the nuptials through a status update on the social networking site.
The 28-year-old billionaire's wedding took place a day after Facebook's initial public offering on the Nasdaq stock exchange on Friday.
More than 280,000 people "liked" Zuckerberg's status change, which was accompanied by a photo of the smiling couple in wedding attire in a small, verdant outdoor setting with a string of lights behind them.
In the photo, the famously casual Zuckerberg is wearing a dark blue suit and tie, a departure from his trademark "hoodie," while Chan has on a sleeveless white dress with lace overlay.

The pair wed in an intimate backyard ceremony in Palo Alto, California, according to People magazine. The couple had planned the exchange of vows for four months, but surprised their guests, who thought they were to celebrate Chan's recent graduation from medical school, the magazine reported.
Zuckerberg's sister, Arielle Zuckerberg, posted, "Balls. Now I'm the only unmarried Zuckerberg..." on her Facebook page. She is listed by Chan as a family member on the site.
Zuckerberg designed a simple ruby wedding ring for Chan himself, People reported. Guests dined on food from the couple's favorite restaurants, and nibbled on mouse-shaped chocolates that the pair ate on their first date nine years ago.
Tim Carvell, lead writer for "The Daily Show" with Jon Stewart, reacted to the news on Twitter, writing: "Congratulations, Mark Zuckerberg! As a gift, I got you the names of all my friends, a list of my favorite movies, and some photos of me!"

Zuckerberg, whose shares are worth nearly $20 billion and who retains voting control of Facebook, marked the debut of his company's stock at Facebook's Silicon Valley campus on Friday, symbolically ringing the opening bell for stock trading.

The IPO did not go as well as the social networking company had hoped, with shares closing just above the offering price of $38 a share after trading glitches and a last-minute, 25 percent increase in the number of shares being sold.

Facebook's emergence as a cultural phenomenon was depicted in the fictionalized 2010 film "The Social Network."

Zuckerberg, Time magazine's Person of the Year in 2010, started Facebook in his Harvard University dorm room eight years ago, before dropping out of the Ivy League school. Chan just graduated from medical school at the University of California, San Francisco. The couple met while at Harvard.

Neither Zuckerberg nor Chan commented further about their marriage on their Facebook pages, and Facebook representatives did not immediately respond to e-mailed requests for comment on the wedding.

The couple adopted a Hungarian sheepdog named Beast a year ago, and live together in Palo Alto.