Pastor caught trying to use mum for money ritual 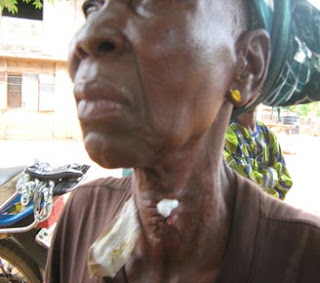 Residents of Agboku, a community in the Ado-Odo area of Ogun State were thrown into confusion on when news filtered out about the kidnap of a 70- year-old-woman, madam Aduke Karimu Sawo. The kidnappers were said to be money rituals. But what alarmed people of the area was when it became clear that they were sent by Pastor Rafiu Sawo, the biological son of the woman.
Born a Muslim 35 years ago, Rafiu Sawo is now a Christian and the founder of Celestial Church of Christ [Oke Itura Parish], Owode, Ogun state, which he shepherds. The old woman was reportedly kidnapped and taken away on a chartered motorcycle to a thick forest, near Ayede village where her throat was slashed with knife.
Taken for dead, she was then covered with raffia leaves and dumped by the bush path. Her assailants thereafter took leave of 'the corpse' to put a call across to Pastor Rafiu to come over and sever the head as required for the money ritual .Unknown to them, Madam Aduke was still alive and she escaped to safely before they came for her.

Recounting her ordeals and narrow escape, she told our reporter in a private clinic at Ado Odo, where she is still recuperating, that it was God that saved her. Telling her strange-but-true story, she said: "My name is Aduke, my husband's name is Sawo, now late. I am about seventy years old. I have five children, namely, Wahab, Silifat, Iyabode, Rashidat, and the one in question now is Rafiu.

“Since my husband passed on, I have been charged with the responsibility of sending them to school and looking after their welfare. I suffered untold hardships and did all kinds of odd jobs to take care of myself and the children before old age started catching up with me.”

Madam Aduke, who looked frail on the hospital stretcher stated further that, "sometimes I fetched water from the Ado-Odo streams to houses for a token in order to make ends meet. Also, I sold different herbs cut in the bush.

“My other children are contend with this simple life and they assist me in my old age. Rafiu, who is the fourth in the family has always been the black sheep among them all. Like the prodigal son, Rafiu ran away to Ajangbadi, in the outskirts of Lagos where he stayed for close to three years, in the company of some friends of questionable character. I warned him to avoid the company of all bad friends to no avail.”

As at the time of posting, Olufamous.com could not confirm if men of the Nigeria Police have succeeded in arresting Pastor Rafiu and his accomplices.