Tuface takes stars on a treck 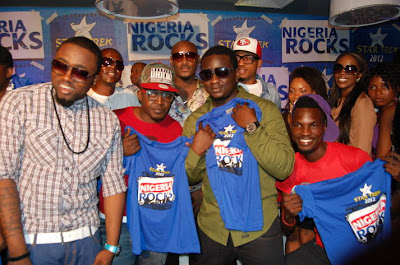 He’s Nigeria’s biggest artiste. Now he’s been signed on to headline Star Trek, the biggest and longest running concert/music tour in the country.
Indeed, this year’s edition of Star Trek is set to be even more explosive as superstar crooner, Tuface Idibia, was officially signed on in a grand ceremony held recently in Lagos. Tuface will perform alongside other top Nigerian music Stars in the nationwide music tour which will move across 10 cities.
Speaking on the development, TuFace expressed happiness at the opportunity to perform in what he termed as ‘Nigeria’s biggest music concert ever.” I am really happy at this opportunity. For me to perform in Nigeria’s biggest music concert is a big deal and I thank Nigerian Breweries, makers of Star lager beer, for bringing me along to do my thing with other great Nigerian music singers,” he said.

Also lined up to perform in the music tour are D’Banj, Sound Sultan, M.I, 9ice, Obesere, Wande Coal, Flavour, Tiwa Savage, J. Martins, Naeto C; Ice Prince and Omawunmi.
Others are Yinka Best, Mr. Raw, Wizkid, KC and Waje, Just like in previous editions, Star Trek will not only  be about established music stars. Winners of the just concluded 2012 Star Quest, Crystals Band will also be on stage as well as The B.E.A.T, Diamondz, Juke Box and Da Beat, all past winners of Star Ques,.
Also speaking at the event was Tony Agenmonmen, Marketing Manager (lager), and Nigerian Breweries Plc, who stated that Star Trek was bringing excitement and fun to the cities where it would be held. “I can assure you that it will be a great experience in the different cities where Star Trek will hold. Since 2002, only one beer brand has consistently taken the very best of Nigerian artistes to locations where music concerts of that magnitude are not normally held and this year and we are following in the tradition,” he said.
While describing Tuface’s inclusion in this year’s edition of Star Trek as fitting, Agenmonmen promised that Star Trek 2012 will deliver on the promise of fun and excitement “It is only fitting that Star Trek should sign Tuface on. The biggest beer brand in the country certainly deserves to have the biggest artiste performing in the biggest concert in the land. It is only natural. I can promise that Star Trek 2012 will deliver on the promise of fun and excitement,” he said.
He also commented on the other performing artistes who he described as an ‘all star cast,’ “Our line-up of artistes this year is truly an all-Star cast line up. Just like in previous years, we will be parading the very best of the best and they will be staging the best of musical performances.”
Star Trek, a musical concert which was introduced in 2002, is essentially a brand building activity that takes the best of Nigerian artistes to various urban and semi-urban towns across the country.
The biggest and most consistent concert of its kind in the country, Star Trek will kick off at Adamasingba Stadium, Ibadan, on May 25, before moving to IBB Stadium, Makurdi, on May 26.
From Makurdi, the Star Trek train will move to Ejigbo Mini Stadium, Ejigbo, on June 1. Zenabab Hotels & Resort, Ilesa will also host the Star Trek train on June 2 while Stonefield, Etete Road, GRA, Benin will also be agog for the Star Trek train on June 8 just as Sapele Township Stadium, Sapele, will also feel the groove from the music stars on June 9.
The show continues  at Marble Arch Hotel, Awka on June 15, Abakaliki Township Stadium, Abakaliki on June 16 while Uyo Township Stadium, Uyo and Cultural Centre Complex, Calabar will host the Star Trek train on the 22nd of June and 23rd of June respectively.