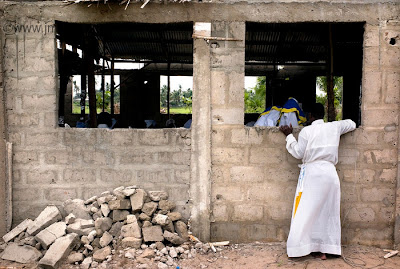 A ‘prophet’ with the Cherubim and Seraphim Church was yesterday forced to demolish the church he erected near the Ijora-Olopa bridge in Lagos State, Southwest Nigeria.
The area was again raided by men of the government task force two weeks after they had earlier demolished all illegal structures and shanties under the bridge. The task force officials said they received information that area boys and miscreants had gone back to the area and had begun living under the bridge again.
When the task force officials arrived, many of the area boys, including the ‘prophet’, were caught unawares as some of them were sleeping in their makeshift apartments.
They were all forced to quit while the task force officials confiscated their properties which they later threw away. (Metro news)